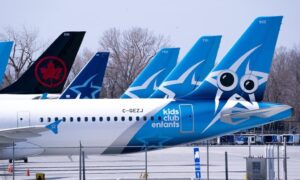 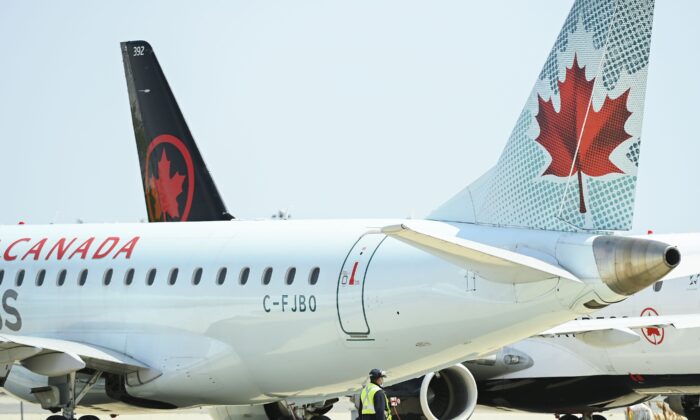 A worker walks past Air Canada planes grounded due to the pandemic on the tarmac at Pearson International Airport in Toronto on April 27, 2021. (The Canadian Press/Nathan Denette)
Viewpoints

If indeed the state should ever be obligated to subsidize private enterprises, it is when those enterprises have been harmed through state intervention.

Restrictions put in place to fight the COVID-19 pandemic sent shockwaves through many industries and put hundreds of thousands of jobs at potential risk. The government created the Canada Emergency Wage Subsidy (CEWS) and gave a number of bailouts to large companies in hopes of mitigating job losses.

The airline industry has been impacted particularly hard, and it wasn’t surprising that Air Canada needed help. It was galling but again unsurprising to discover that while taking government bailouts and wage subsidies, Air Canada doled out $10 million in executive bonuses while still laying off 20,000 employees.

In response to growing public outrage over the bonuses, senior Air Canada executives have volunteered to return their 2020 bonuses, which amount to about 20 percent of the bonuses issued. That action of course does not undo the damage done to public trust in their having accepted the bonuses in the first place. It just indicates that these executives have finally realized that they have done something wrong after having been caught with their hands in the cookie jar.

What was the purpose of the bailouts if the jobs weren’t saved, and how on earth do executives deserve millions of dollars in bonuses at a time like this?

Through decades of corporate welfare to selected companies, Canada has created a culture of entitlement among its executive class. While subsidies and bailouts should be accepted grudgingly and only at times of great need, many companies consider that kind of revenue as a part of doing business. Lobbying for government money is an industry unto itself.

The Air Canada executives, who managed to negotiate $5.4 billion in low-interest loan from taxpayers in April after the company took $554 million in wage subsidies in 2020 and said it would continue using the CEWS program in 2021, truly thought they had done a great job and deserved bonuses for it. Why shouldn’t they? That’s simply the way it’s done in Canada.

While the executive bonuses are galling in principle, we should also be concerned about the massive loan given to Air Canada under the pretext of pandemic aid. Ottawa has a history of forgiving portions of these kinds of loans. In 2009, the Harper government loaned billions to Canadian automakers under the pretence of protecting jobs. In 2018, the government quietly wrote off $2.6 billion in those loans to Chrysler. While the executives within Air Canada may be shameless in pursuing government aid, they certainly aren’t fools. They know that the terms of repayment can and likely will be renegotiated down the road. This is learned behaviour.

In addition to extending low-interest loans worth some $5.4 billion to Air Canada, the government also bought a $500 million stake in the airline that Finance Minister Chrystia Freeland claimed would help ensure that taxpayers benefit once the company got back on its feet again.

Investing taxpayer’s money into private industry rarely pays off, and the federal government is not the only one that gets into the game. Alberta Premier Jason Kenney invested $1.5 billion into the now-cancelled Keystone XL pipeline project. It is unlikely that the province’s taxpayers will see that money again. Companies have learned that lobbying governments for investment can be more lucrative than trying to sell shares to private investors who apply careful scrutiny before committing dollars to companies.

The culture of corporate dependency upon government subsidies fosters poor company management. Why should chronic recipients of corporate welfare such as Bombardier strive to become profitable when they know that the government will never turn them down when they come begging for another bailout? Why should a company approach financial institutions that expect security, regular payments, and interest payments on loans when effective lobbying could land an interest-free loan from the government that may never be paid off?

The motivation to strive for corporate efficiency and profitability is lost when we have a system that rewards mismanagement and loss.

Companies that aren’t within the circles receiving government aid are adversely impacted by corporate welfare as well. It is difficult to compete with companies that don’t fear economic loss. It is demoralizing for executives and small business owners when they struggle to maintain financial viability while watching other companies continue to receive and mismanage bailouts with impunity. Why work hard and strive to grow?

As we enter a period of recovery and rebuilding from the COVID-19 pandemic, we need our business sector to be as motivated and streamlined as possible. It is going to be a competitive world market for products, services, and personnel. Unless Canada addresses the unhealthy corporate culture that it has fostered through decades of corporate welfare, we will not be able to effectively compete in an increasingly competitive world market.

Cory Morgan
Cory Morgan is a columnist and business owner based in Calgary, Alberta.
TOP NEWS