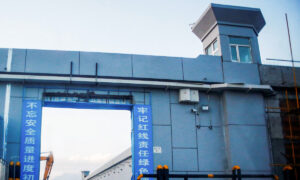 Canadian police were searching on Monday for a man and toddler swept away in Quebec as heavy rains swelled rivers in the province and the military raced to sandbag homes.

Schools and government buildings have been closed in some areas as the province grappled with the worst flooding in decades. Montreal, Quebec’s largest city, declared a state of emergency on Sunday and the military has been sent in to assist.

A Quebec police spokesman said the man and toddler were swept away after their car swerved into a river in the province’s eastern Gaspé region on Sunday evening.

The man, child and a woman climbed onto the roof of the vehicle but choppy waters flipped the car, sending all three into the water, Sgt. Claude Doironthe said.

The woman hung onto a branch and escaped; the man and child were swept away and missing as of Monday morning, police said.

Approximately 30 police officers and firefighters were patrolling the riverbanks after the weather made helicopter assistance impossible.

The Canadian military has deployed about 1,200 troops to help deal with the flooding, with more rain expected.

Both provinces have been dealing with fallout from heavy spring rainfall and at least 124 Quebec municipalities were affected by flooding that inundated thousands of residences and forced the evacuation of homes.