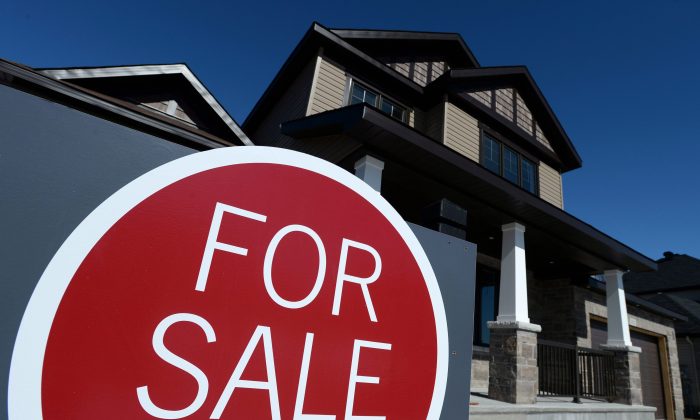 A sign advertises a new home for sale in Carleton Place, Ontario in this file photo. At the national level, home sales have almost reached a peak for six years. (The Canadian Press/Sean Kilpatrick)
Business & Markets

The challenges facing Canada’s housing market are getting bigger and more diverse, but the solution may be to wait and see.

The latest release by the Canadian Real Estate Association (CREA) on Nov. 16 showed home sales rose in October by 1.8 percent and reached the second-highest monthly level in almost six years.

“The national increase was driven by monthly sales gains in the lower mainland of British Columbia together with the Greater Toronto Area (GTA),” according to CREA.

The report also highlighted the diametrically different problems facing the overheating markets in B.C. and Ontario and cooling markets in Alberta and Saskatchewan.

The regional dichotomy in the Canadian housing market is more obvious than ever.
— National Bank

Prices in Calgary were lower by about 1 percent; in Saskatoon by about 1.5 percent, and in Regina by more than 4 percent as provincial economies heavily linked with the energy sector and commodities continue to struggle. Prices in cities like Ottawa, Montreal, and Greater Moncton were flat to slightly higher.

Whether it is a bifurcated or even a trifurcated national housing market as the Bank of Canada described in its October monetary policy report, the hot regions are getting hotter and the cooling ones are getting cooler.

CREA’s sales-to-new listings ratio is not in balanced territory (ratio between 40 and 60) for slightly over half the local markets analyzed. “An almost equal number breached the 60 percent threshold in October, nearly all of which are located in British Columbia and Ontario,” according to CREA. This means Canada roughly has the same number of buyers’ markets as sellers’ markets.

“The regional dichotomy in the Canadian housing market is more obvious than ever,” according to National Bank. It singles out the four markets of Vancouver, Victoria, Toronto, and Hamilton where being at an all-time high is true or almost true.

And while the discrepancy widens, the aggregate problem worsens. Canada Mortgage and Housing Corp. (CMHC) president and CEO Evan Siddall said 11 census metropolitan areas (CMAs) are overvalued as of Q4 2015 compared with seven a quarter ago.

The presence of foreign money propping up Greater Toronto and Greater Vancouver has been the elephant in the room, however, appropriate data is not available to accurately measure it. This challenge makes it more difficult to design policies to better manage the situation.

Siddall touched on the potential problem with foreign money. “Foreign investment may be more mobile and subject to capital flight. This would increase volatility in domestic housing markets,” he said at the Global Risk Institute Annual Conference in Toronto on Nov. 10.

With Chinese nationals dominating Vancouver’s luxury home market, according to anecdotal reports, the risk of a significant slowdown in mainland China’s economy could trigger a wave of selling in Vancouver. It’s one thing to have an overvalued housing market, but if it appears to be subject to another common risk factor, that is of major concern.

Toronto’s condo market has been singled out as a ticking time bomb, but a recent increase in the unabsorbed (built but unsold) units is unlikely to lead to a crash, according to a CIBC research note.

While the number of unabsorbed condo units in Toronto rose from less than 1,000 to close to 3,000 between December 2014 and May 2015, a significant portion are concentrated with a small handful of developers and projects. Given that the unabsorbed units are not more uniformly spread out, the risk is better contained.

“Those who look at the rise in unabsorbed units as a sign of increased vulnerability are barking up the wrong tree,” says Benjamin Tal, CIBC’s deputy chief economist, in the note.

The Bank of Canada felt the overheating of housing markets in Greater Vancouver and Toronto would worsen having cut rates by 0.50 percent in 2015. “Meanwhile, as financial vulnerabilities in the household sector continue to edge higher, risks to financial stability are evolving as expected,” the central bank said in its Oct. 21 interest rate decision.

It’s too early to tell what new finance minister Bill Morneau will do. In his first press conference on Nov. 10, Morneau wouldn’t opine saying he’s still getting up to speed on a number of files including the housing market.

RBC expects home resales to ease by 0.7 percent next year after a solid 5.0 percent gain this year citing in a note, “continued headwinds in markets sensitive to the oil sector and the activation of self-correcting mechanisms (e.g. deteriorating affordability, rising supply of newly built homes) in Canada’s high-priced markets later next year.”