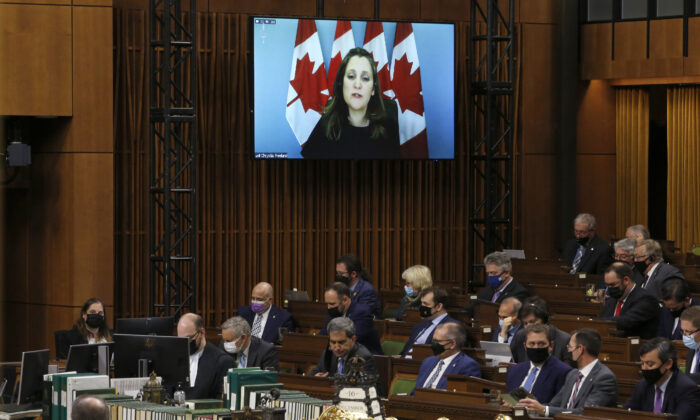 Deputy Prime Minister and Finance Minister Chrystia Freeland rises virtually during question period in the House of Commons on Parliament Hill in Ottawa on Dec. 16, 2021. (THE CANADIAN PRESS/Patrick Doyle)
Viewpoints

It’s not just the recent blast of winter giving me chills as 2021 comes to a close. The political manoeuvring being done in Ottawa as the fall parliamentary session came to a close is sending outright shivers up my spine, particularly when it comes to the nation’s finances.

While Finance Minister Chrystia Freeland was celebrating a reduction of the budget deficit during a fiscal update, frustrated members of the Commons finance committee tried and failed to get clarity on a number of fiscal questions posed to senior finance bureaucrats. Billions in new pandemic response costs were unexplained, while finance officers refused to answer questions about the ballooning costs.

Bill C-2, An Act to Provide Further Support in Response to Covid-19, was the spending bill in question. It was passed in the House of Commons at 4:16 p.m. on Dec. 16, under the assumption that the policy would cost $7.4 billion. At 5:10 p.m., Freeland admitted that the bill will actually cost $11.9 billion. That’s a 61 percent increase on estimates over the course of less than an hour.

The timing of the revelation was well-orchestrated, of course. Freeland knew legislators would be furious with the massive increase in expenditures. By rushing the bill through the House just before it recessed for the holidays, Freeland ensured the furor over the deception would be forgotten by Canadians, if they even noticed it at all.

Why such subterfuge when increasing expenditures, though? The Liberal government had already massively increased spending in the last year and has been re-elected since then. Canadians gave the government at least tacit approval to keep the spending floodgates open when it comes to pandemic measures. One wouldn’t think they would feel the need to resort to such budgetary deception when passing bills.

The financial numbers we know of paint a frightening financial picture. Canada is about $1.2 trillion in debt, and that number is growing by a breathtaking $17.6 million per hour. Inflation is rising at a rate unseen in decades, causing hardship among citizens with fixed incomes as staples such as food and energy become unaffordable. The Omicron COVID-19 variant is sending shockwaves through the economy, and we may be facing lockdowns yet again. We have to begin budgeting with these challenges in mind, and we can’t do that if the financial figures are being hidden.

Most Canadians understand why spending was increased so dramatically. People and businesses were shut down due to government-imposed lockdowns. In being responsible for the lockdowns, the state was also obliged to step in and try to ease the damage the lockdowns caused. The Canada Emergency Response Benefit (CERB) and business subsidies were rushed out to head off mass bankruptcies. Canadians can understand the processes will have holes in them since they were created in a rush.

It is time now though to step back and assess the costs of those pandemic relief initiatives. The time for rushed, panicked expenditures is done. We need to get our books in order. With the Liberal government obfuscating when it comes to the nation’s finances though, getting to the bottom of the books is going to be a tough task.

It has become apparent the CERB likely issued many fraudulent payments. Normally when we need somebody to take a deeper look into something like this, we turn to the auditor general. With the CERB program costing nearly $80 billion, the cost of fraudulent claims could be very substantial. Unfortunately, the auditor general has said she won’t be even beginning her audit of the CERB program until at least 2023 because the Canada Revenue Agency hasn’t shared the numbers with her yet. It has been almost two years since the program was initiated.

The chances of recovering any funds that were fraudulently taken are slimmer with each passing day. If there has been a crime, it has to be investigated quickly. If there are breaches in program controls, we need to expose them as soon as possible, not wait years while they continue to be exploited.

We need to see a light at the end of the pandemic tunnel, and that includes financial recovery. I know and accept that the financial outlook is bleak. I would feel better though if I at least knew what the real numbers are. I would be comforted if I thought the Liberal government was getting serious about getting a handle on things.

Unfortunately, it appears the government is most concerned with covering up the mess rather than even beginning to clean it up. That is sending me into the new year with more than a little nervous trepidation.