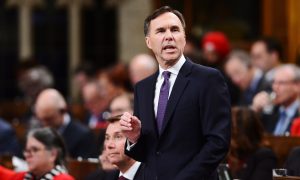 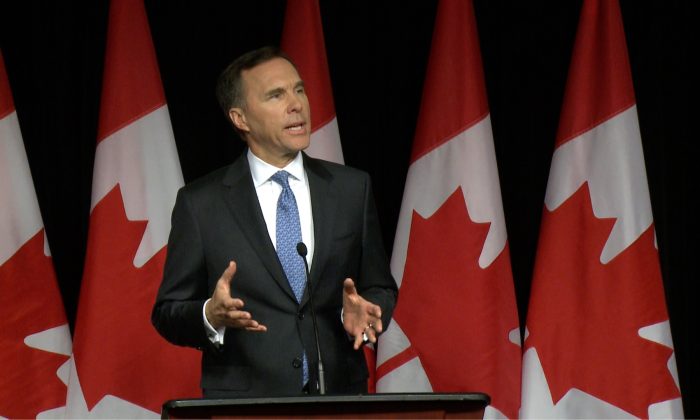 Canada's finance minister Bill Morneau holds a press conference on March 19, 2019 prior to the release of the Liberal government's fourth and final budget before the fall federal election. (Gerry Smith/NTD Television)
Economies

OTTAWA—Canada’s federal Budget 2019 included a new program to help first-time homebuyers along with other selected measures while keeping a key metric of the nation’s indebtedness on a declining trend.

“I want to be very clear that this is a budget for people and for communities all across this country,” Morneau said in his speech in the House of Commons.

The government remained focused on a declining debt-to-GDP ratio rather than a path to balancing the books. This key federal ratio is projected to decline from 30.8 percent to 28.6 percent by 2023, which is the lowest in the G7.

The federal deficit is projected to decline from $19.8 billion to $9.8 billion over the next five years. Net government spending is projected to increase by $200 million in 2019–20 and by $1.6 billion in 2020–21 over and above what was announced in the 2018 Fall Economic Statement. It gets cut by a total of $2.5 billion over the final three years of the projection horizon.

Morneau defended the government’s investments in middle-class Canadians while staying fiscally responsible as reporters questioned him about still not having a plan to balance the books.

“We’ve done this by maintaining a good fiscal track,” he said in a pre-budget press conference on March 19.

Avery Shenfeld, CIBC’s chief economist, said that the “new thinking among serious academic economists” is that in a low interest rate environment—which has been the case for the last 10 years—debts and deficits aren’t as worrisome.

“Running a deficit which is still less than 1 percent of GDP a year is not going to burden our children with huge interest payments to come,” Shenfeld said in an interview.

In the government’s favour is that its cost of debt is about 2.5 percent, according to 2017 public accounts. Adjusted for inflation, it is lower than the rate of economic growth.

“Research has found that the costs of public debt are low when a country’s economic growth rate is higher than the inflation-adjusted interest rate on its public debt. It’s just arithmetic,” said Bank of Canada senior deputy governor Carolyn A. Wilkins in a speech on March 14.

As the housing market cools notably in Vancouver and Toronto and affordability remains poor, the government’s measure to aid first-time homebuyers has the Canada Mortgage and Housing Corp. (CMHC) financing a share of the equity in the new home.

The government envisions about 100,000 first-time homebuyers benefiting from the innovative program over the next three years.

“We are exactly dealing with the challenge that people face in getting into a new home,” Morneau said.

The amount financed by CMHC would have to be paid back once the house is sold.

Further details are to be released later this year, but the program is expected to go into force in September.

The government did not change the maximum amortization term for mortgages from 25 years to 30 years as some media reports suggested it might in order to help millennial first-time homebuyers. That change might have brought fears of borrowers piling on more debt and further inflating housing markets.

But Morneau doesn’t have that fear about the shared equity program saying, the measure helps people be less indebted as they buy their first homes.

“We know that it’s not going to make an impact on the overall market from a pricing standpoint meaning people are actually going to be better off, more optimism in terms of housing,” he said.

The cost of the First-Time Home Buyer Incentive is up to $1.25 billion over three years and another $100 million for a fund that will provide loans to third-party shared mortgage providers so they can scale up their businesses.

“Because we’ve given a larger opportunity for homes that are brand new, we are actually increasing the supply of homes in the country, which we know is critically important to deal with the dearth of new home opportunities especially in places like Toronto and Vancouver,” Morneau said.

Shenfeld was more sanguine on the impact of the housing measure saying that the best thing for homebuyers is letting the market adjust.

“Left on its own the market might correct enough,” Shenfeld said.

While spending on residential housing had been a big driver of economic growth, it has been tailing off with the biggest culprit being the federal regulator’s B20 mortgage stress tests.

Lack of housing supply in key markets is the bigger problem and Shenfeld says the federal government doesn’t really have the jurisdiction to deal with it.

“It’s more the provinces and the municipalities have together to ensure that we’re getting enough increased density, enough home construction,” he said. “That’s ultimately what can help homebuyers, not anything on the demand side.”

So Far So Good

The Canadian economy has recently started to hit some bumps in the road after a period of stronger economic growth which helped revenues rise and kept deficits from widening insidiously.

Nevertheless, Canada is expected to benefit from having the second-strongest projected economic growth—after the United States—in the G7 at 1.9 percent over the next two years.

In effect, the Liberals have had more money to spend. But should the economy slow further, the government will be expected to ramp up spending to temper the weakness.

Budget 2019 was expected to include new government spending with an eye on the election and possibly to divert attention from the worsening SNC-Lavalin scandal. It was also expected to focus on the individual rather than business.

In sum, Shenfeld described Budget 2019 as more of a sprinkling of tax credits and some small spending items.

“It’s not a budget designed therefore to give a huge lift to GDP growth in the near term,” he said. “Whether there are some other bigger ticket items that will be in the election platform rather in the budget remains to be seen.”