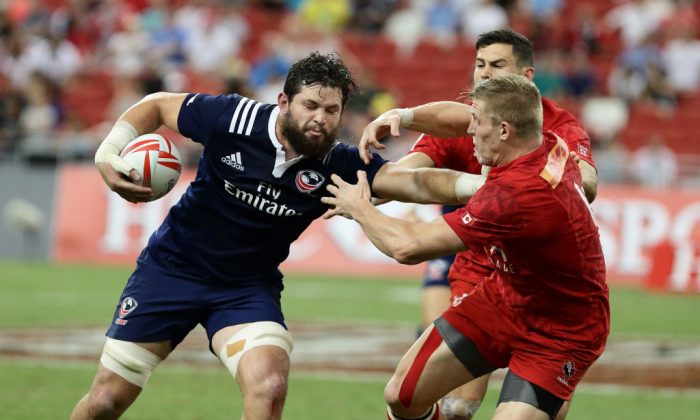 Danny Barrett of USA fends off a challenge from John Moonlight of Canada during the Cup Final 2017 Singapore Sevens match between USA and Canada at National Stadium on April 16, 2017 in Singapore. (Suhaimi Abdullah/Getty Images)
HK Sports

SINGAPORE—The Singapore Sevens again produced a surprise winner: last year it was Kenya that stunned Fiji in the final, this year Canada won their first Sevens Championship (in 140 attempts since 1999!) beating their North American rivals, the USA 26-19 in an exciting final to round-off a tournament full of shock results.

On Saturday, Canada had lost heavily to Fiji 35-7, and the USA lost to New Zealand 21-14 in their respective pool matches, an all-North American final was not expected.

Both teams served up a great match: Canada began sharply and sped out to a 19-0 lead after 5 minutes, before the USA had even touched the ball, with three tries from Matt Mullins, Harry Jones and Mike Fualifea. Once the USA managed to get their hands on the ball, and create space, Perry Baker and Stephen Tomasin both scored before halftime to reduce the scoreline to 19-12.

In the second half, momentum was shifting to the USA. Baker again created a try using his speed to carve space through the Canadian defence, to touchdown under the posts and draw the score level at 19-19, with 3 minutes left on the clock, and confidence starting to brim in the USA team.

Canada stayed calm, and were marshaled supremely by man-of-the-match Nathan Hirayama, who held the ball up for Lucas Hammond to sprint clear through the USA defense, to score the match-winning try, and confirm Canada the surprise but deserved winners in Singapore.

In other results, England won the third-place play-off, narrowly beating Australia 14-12. The Plate was won by New Zealand beating South Africa 17-12; the Challenge Trophy went to Wales, who beat Scotland 24-12: and finally, the Shield was won by Argentina who romped home against Russia 40-19.

Saturday provided no indication of the surprise results in store on Sunday: only pool A when England lost to France yet later beat South Africa, then France losing to Japan, gave any sign the results would be topsy-turvy the next day. It was great entertainment; it’s always refreshing to see a new name on the winners list, and for Canada it’s long overdue.

There’s now a break until the 9th leg of the HSBC Sevens in Paris (May 13-14), which gives teams time to rest and recuperate. The intensity of the matches, and short span between the Hong Kong and Singapore Sevens leaves teams struggling to recover, physically and mentally. The results from Singapore don’t change the overall standings: South Africa continue to lead with 157 points, and look secure; followed by Fiji on 132 and England on 130; Japan prop-up the table, and appear increasingly likely to be relegated this season.

The Singapore Sevens is played in the impressive National Stadium in the Sports Hub, and culminates in a week of rugby related activity in the City.

The only down side, is that the crowd numbers are yet to build up and empty seats dominate the backdrop even on Sunday. This is a far cry from the Hong Kong Sevens and not a good advert for the appeal of the game. On the pitch, the event is pure entertainment. And after a series of surprise results at Singapore 2017, Canada become rugby’s history boys.