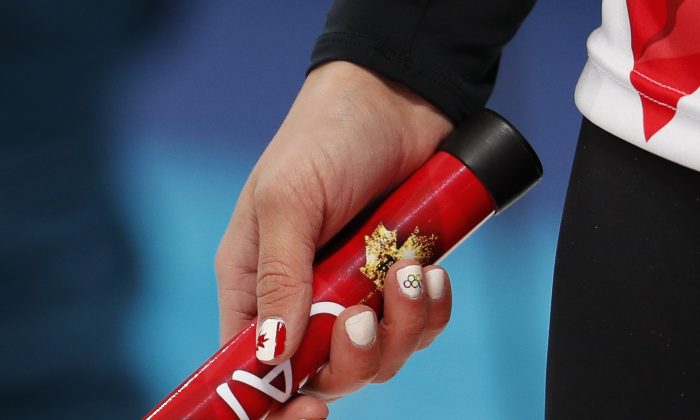 A close up of Canadian Rachel Homan holding her broom during the Canada-Denmark game in Pyeongchang 2018 Winter Olympics on Feb. 16, 2018. (Reuters/Cathal McNaughton)
Canada

GANGNEUNG, South Korea—Defending gold medalists Canada were in danger of crashing out of the Olympic women’s curling tournament after a shock 9-8 extra-end loss to Denmark on Friday left them without a win through three rounds.

Holding the hammer the Canadian world champions had looked poised to secure a victory only to watch skip Rachel Homan’s last rock wreck on a guard in the 11th end as Madeleine Dupont’s Danish foursome looked on stunned by their good fortune picking up a first win.

“We can play a little looser now because we came in as team number 10 (of 10),” said Denmark second Julie Hogh. “If we could get one win we would be really happy, and now we have it.

“So of course we’re going to move forward and take one day at a time, but we can play a little loose now because we have the win we really, really wanted.”

If Homan’s rink is to defend the gold won by Jennifer Jones foursome in Sochi it will likely require the a sweep of their last six preliminary round contests.

Japan and Sweden sit at the top of the standings with marks of 3-0 while Canada (0-3) are the only nation without a win and find themselves in a big hole with only four of the 10 teams advancing to the semi-finals.

“Teams qualify with three losses all the time,” said Homan, shrugging off the disappointment. “We just have to win the next one.

“Keep sticking together as a team and moving forward.”

Leading 8-6 in the eighth end, Canada opened the door for the Danes who grabbed a pair in the 10th after Homan failed on takeout setting the stage for extra ends.

“Obviously disappointed with the result, I think we have been playing pretty well just been missing some shots and we’ve had teams play really well against us,” said Canadian lead Lisa Weagle.