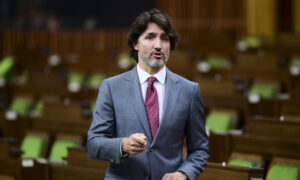 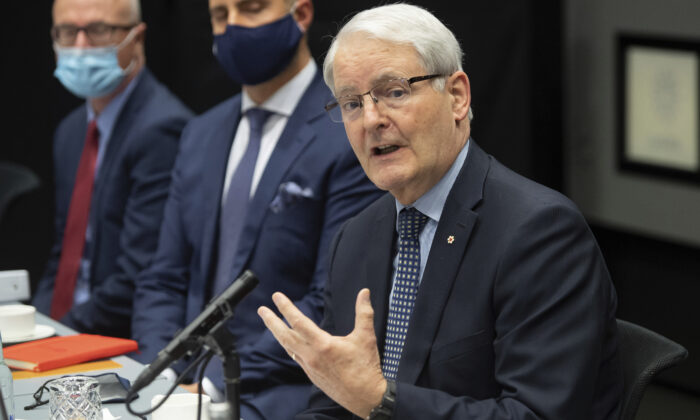 Canadian Foreign Minister Marc Garneau speaks during a meeting with U.S. Secretary of State Antony Blinken at the Harpa Concert Hall in Reykjavik, Iceland, on May 19, 2021. (Saul Loeb/Pool Photo via AP)
Canada

“It is important that we do the science to figure out where it originated from because it may happen again and so therefore we do support President Biden’s announcement earlier this week to investigate more fully,” Garneau said in an interview on CTV’s Evan Solomon Show on Sunday.

Garneau’s comments come after Prime Minister Justin Trudeau expressed his support on May 27 for international efforts to understand how the global pandemic began.

On May 26, Biden requested U.S. intelligence officials to conduct further investigations to uncover the origins of COVID-19, including any possibility the trail might lead to a Chinese laboratory. COVID-19 is the disease the CCP (Chinese Communist Party) virus causes.

According to Biden, the U.S. Intelligence Community (IC) has “coalesced around two likely scenarios” but has not reached a definitive conclusion on the question whether the virus has emerged from human contact with an infected animal or from a lab accident.

He ordered the IC to report back within 90 days, including preparing a list of specific questions to probe China. U.S. national laboratories are also directed to assist IC in their investigations.

On March 30, the World Health Organization (WHO) published a report, jointly conducted with Chinese and international scientists, on their findings of how the pandemic may have emerged.

Of the four “possible pathways” that the report identified, the likelihood that the outbreak originated from a laboratory accident was deemed “extremely unlikely.” Infection from bats via an intermediary animal, however, is considered “very likely.”

The findings stand in stark contrast from what a former U.S. State Department contractor found during his investigation on the CCP virus origins.

“It came out of nowhere, and it was optimized for transmission between humans in a way that no bat-borne coronavirus ever had been. So what’s up? A pangolin gets mated with a bat gets mated with a furin cleavage site of a human being? How does that happen? It’s not probable,” David Asher, who worked for the department during the Trump administration, said on Fox News’ “The Story” on May 29.

Asher said he led the probe into the virus origins and that the team found “practically no evidence” that the virus came from an animal. “In fact, it was statistically 1 in 13 million to 1 in 13 billion, when I talked to our bio-statisticians,” he said.

He also pointed to the Wuhan Institute of Virology, a top-level laboratory in the Chinese city where the first COVID-19 cases emerged, alleging that the lab is “not a merely civilian institution” but one that has been collaborating with the Chinese military in secret projects since 2017.

“We had very definitive information, only a bit of which we put out publicly, that showed they were engaged in this classified, secret effort to develop these super viruses and that it appeared it had spilled out of that laboratory,” he said. “That was the only plausible information that we were presented.”

With reporting from Zachary Stieber