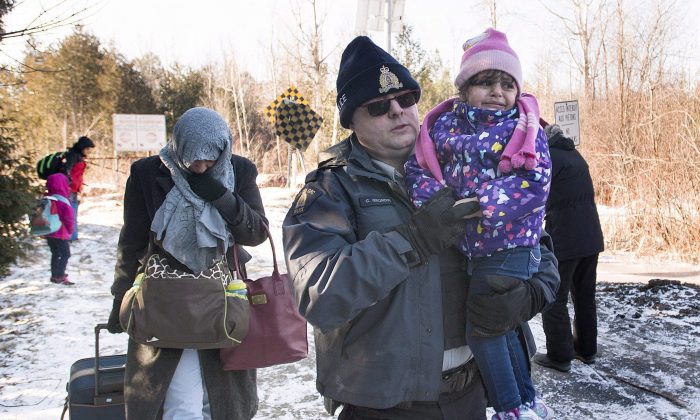 An RCMP officer escorts a woman and a child claiming to be from Yemen as they cross the U.S.-Canada border in Hemmingford, Que., on March 5, 2017. (THE CANADIAN PRESS/Graham Hughes)
International

Canada Police Charge Woman for Smuggling Asylum-Seekers From US

TORONTO/WINNIPEG—Canadian police on Wednesday said they charged a woman with human smuggling offences in connection with the asylum seekers who have been streaming over the border from the United States in growing numbers in recent months.

Royal Canadian Mounted Police they intercepted a 43-year-old woman driving nine people across the U.S. border into the prairie province of Saskatchewan on Friday night. All of the asylum seekers are from West Africa but police would not give their nationalities, genders or ages.

The increasing flow of hundreds of asylum seekers of African and Middle Eastern origin from the United States in recent months is becoming a contentious issue in Canada.

The RCMP has intercepted more than 1,100 people walking into Canada in the first two months of 2017.

The nine people were the first intercepted in connection with alleged human smuggling, the RCMP said on Wednesday. They were transferred to the Canada Border Services Agency, processed and released. They have filed refugee claims and are living in Canada while they wait for their claims to be decided, police said.

Refugee advocates have said Canada’s policy to turn back people if they make refugee claims at border crossings—a provision of the Canada-U.S. Safe Third Country Agreement—increases the problem of human smuggling and unlawful border crossings.

“Unfortunately one of the effects of the Safe Third Country Agreement is to provide business opportunities for smugglers, who often take advantage of the need and desperation of refugees,” said Janet Dench, executive director of Canadian Council for Refugees.

The Saskatchewan charges are part of a four-month investigation in collaboration between Canadian and U.S. authorities. Canadian police said their American counterparts also arrested people but would not say whether any charges had been laid. The investigation is ongoing.