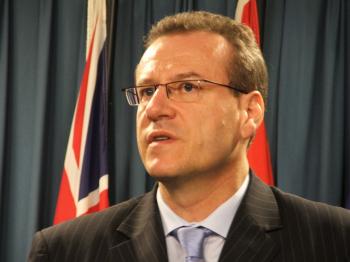 Canadian Member of Parliament Borys Wrzesnewskyj (The Epoch Times)
US

OTTAWA—It was more than a year ago when Member of Parliament Borys Wrzesnewskyj first introduced his groundbreaking draft law aimed at fighting the harrowing underground trade in human organs and other body parts for transplant.

The private member’s bill would make it illegal for Canadians to purchase organs or body parts or obtain them from unwilling victims, whether inside or outside Canada.

The bill intended to address the exploitation of vulnerable people in developing countries who sell their organs for money, as well as prisoners in totalitarian regimes whose organs are extracted without consent and sold.

The bill died on the order paper when the last parliament dissolved and an election was called, but the gruesome trade is a growing global problem that’s as lucrative as ever.

“Stealing someone else’s life to save your own, just because you have the money—that is fundamentally immoral,” Mr. Wrzesnewskyj said.

“Each one of us has been given a lifespan, and just because someone is vulnerable—they’re poor, or they’re in prison in totalitarian regimes that through their penal system dispose of conscientious objectors—it’s fundamentally immoral and unconscionable to take another human being’s life…that’s just wrong.”

Mr. Wrzesnewskyj said the bill is a very complex piece of legislation that sets a number of precedents and took a team of lawyers six months to draft.

“It deals with extraterritoriality and crimes that are quite horrific and only recently possible because of evolution of medical technology and the ability to visit any part of the world. At the same time huge income disparities around the world have allowed those vulnerable in many places to be victimized in this sort of trafficking.”

Because this trafficking occurs mostly abroad, it is important to make it an extraterritorial offence, he said.

Bill C-381 places the onus on Canadian transplant recipients to certify that the organs or body parts they received were donated and no money was paid.

This means providing a certification program and registration process, and requiring transplant recipients to show a certificate indicating they obtained the organs or body parts legally, no matter where in the world the transplant took place.

The bill also compels Canada to maintain a list of Canadians who have been legal recipients of organs or body parts.

In addition, if doctors or other medical practitioners see a patient with scars indicating a transplant, the bill would require them by law to report the patient to the agency maintaining this list to verify that the patient is on the list.

The bill calls for consequences “equal to the horror of the crime,” said Mr. Wrzesnewskyj. Punishment ranges from a five-year minimum sentence to life imprisonment.

Bill C-381 also stipulates that the government establish a list of people involved in this trafficking and bar them from entering Canada.

“Most unnerving is it [includes] doctors and nurses,” Mr. Wrzesnewskyj said.

One example is Amit Kumar, who lived in Brampton, Ontario and became known as “Dr. Horror” last year after news broke alleging that he masterminded a kidney trafficking ring that bought or forcibly removed kidneys from some 500 farmers and labourers in India.

Another story that compelled Mr. Wrzesnewskyj to draft the bill was a 2006-2007 report by two prominent Canadians detailing evidence that tens of thousands of Falun Gong practitioners had been killed by the Chinese regime in the process of extracting their organs for lucrative transplant surgeries.

“It’s one of those issues that take persistence to get attention and to get the matter resolved,” he said.

Mr. Wrzesnewskyj hopes the bill will come up for debate but acknowledged that in the current minority parliament he may get caught in the same situation as the last parliament when the government fell before debate could happen.

Mr. Matas, however, pointed to legislation on child sex tourism as an example of private member’s bills that never passed but whose ideas were later taken up by the government on its own initiative.

It was Mr. Kilgour who attempted to pass the bills without success in 1983. They eventually became government bills and in 1997 Parliament passed Bills C-15 and C-27 allowing police to charge pedophiles in Canada who commit sexual acts with children abroad.

“It’s these sorts of private initiatives that become precursors of future legislation at parliament and in my view it’s very much necessary legislation,” Mr. Matas said.

He said people can help pass Bill C-381 more quickly by writing to the government and opposition parties to ask them to support it.

Mr. Wrzesnewskyj believes the bill will raise awareness and “send a signal in and of itself to countries like China where these sorts of abuses have occurred.”

“Hopefully the very fact of the presence of this law on the books and working its way through the process will give pause to those engaged in this…You’d better change your ways because it’s just a matter of time before you face consequences,” he said.

A number of countries have laws addressing “bits and pieces” of organ trafficking but nothing as complex and comprehensive as Bill C-381, Mr. Wrzesnewskyj said.

The bill has already served as a template for similar legislation in Poland. A parliamentarian has also introduced a similar bill in the Belgian parliament, said Mr. Matas.

Canadian Blood Services (CBS) is the organization mandated to provide national leadership for organ and tissue donation and transplantation (OTDT) in Canada.

Kimberly Young, Executive Director, Organs and Tissues, said CBS is focusing on increasing organ donations in Canada because “that itself is the best way to combat [transplant] tourism.”

"Donation rates are improving slightly in Canada over the last two years but are not improving quick enough, so that gap between the wait time and availabilty continues to grow. We need more organs definitely."

A more informed system, Ms. Young added, “will allow some of the checks and balances that we want to see.”

The overall data collection, reporting, tracking, and monitoring of OTDT practices need improvement across all the jurisdictions in Canada, Ms. Young said. Information on patients receiving out-of-country transplants is among the data that are not reported in any consistent or timely way.

Ms. Young pointed to the Declaration of Istanbul on Organ Trafficking and Transplant Tourism as a key international effort made to discuss “the way [countries] can improve our respective systems so we can decrease incidence of this issue.”

The declaration is the consensus of more than 150 healthcare professionals, officials, scientists, ethicists, and legal scholars from 78 countries and 20 international organizations who met at the Istanbul Summit in Turkey from April 30 to May 2, 2008.

Among the declaration’s key principles is the need for countries to implement laws “to govern the recovery of organs from deceased and living donors and the practice of transplantation.”

Components include “oversight and accountability by health authorities in each country to ensure transparency and safety,” and “a national or regional registry to record deceased and living donor transplants.”

A July 2008 commentary in the leading medical journal, The Lancet, said the declaration “will reinforce the resolve of governments and international organizations to develop laws and guidelines to bring an end to wrongful practices.”

Prior to Istanbul, Israel’s legislature approved a new organ donation law in March 2008 stipulating that brokering sales of organs in Israel or overseas is a criminal offence.

To stop Mainland Chinese and Taiwanese doctors from brokering Taiwanese patients’ organ transplants in China, in October 2007 the Taiwanese government announced it will ban Chinese doctors engaged in such brokering from visiting Taiwan.

“If somebody actually knows that the source of the organ has been killed for the organ and they go ahead and buy the organ anyway and set up the deal, I think they’re an accessory to murder,” Mr. Matas commented on the seriousness of the issue.

“This [bill] is not political. It’s about human rights and the horrific commerce of people’s body parts that exists. It’s real, we’ve got the reports. We need to make sure we’re not complicit in this,” said Mr. Wrzesnewskyj.