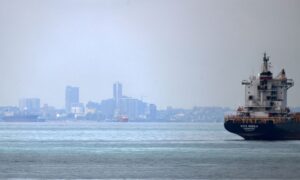 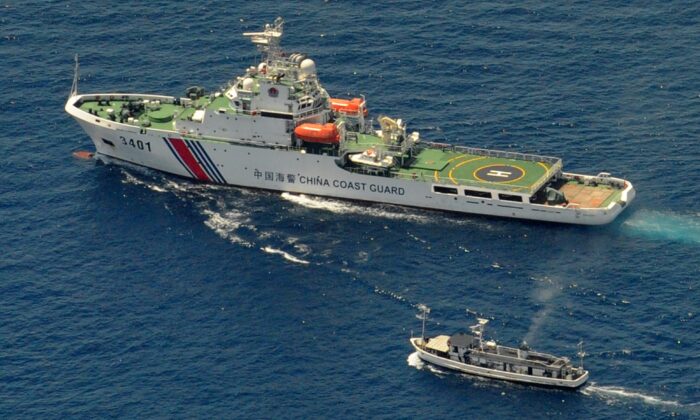 A China Coast Guard ship (top) and a Philippine supply boat engage in a standoff as the Philippine boat attempts to reach the Second Thomas Shoal, a remote South China Sea reef claimed by both countries, on March 29, 2014. (Jay Directo/AFP via Getty Images)
Canada

Canada has called on China to comply with international law in the South China Sea based on a historic ruling by an arbitration tribunal five years ago that rejected Beijing’s territorial claims in the region.

“Canada is particularly concerned by China’s escalatory and destabilizing actions in the East and South China Seas, including, recently, off the Philippine coast, and by the militarization of disputed features and the use of naval, coast guard, and maritime militia vessels to intimidate and threaten the ships of other states,” Global Affairs Canada said in a statement released on July 11.

“On the fifth anniversary of the decision by the tribunal constituted under the United Nations Convention on the Law of the Sea (UNCLOS) in the matter of the South China Sea Arbitration, Canada reiterates the need for all involved parties to comply with it.”

China—which lays claim to most of the waters within a so-called Nine Dash Line, which is also contested by Brunei, Malaysia, the Philippines, Taiwan, and Vietnam—reiterated on July 9 that it did not accept the 2016 ruling by the international tribunal at The Hague.

“We firmly reject attempts to undermine it; nay, even erase it from law, history and our collective memories,” he said.

He added that the ruling serves as guideposts to littoral states, giving those states that enclose the South China Sea the latitude and boundary within which they can exercise their territorial rights, such as “where their fishermen can fish, where they can exercise law enforcement patrols, where they can send their ships without permission from the nearest state, without creating a cause of action or a casus belli [an incident that could bring about a declaration of war] between them.”

Locsin Jr. also likened the 2016 tribunal ruling to a “North Star” that will keep states on course and point them in the right direction in the future “should we, in a moment of weakness or inaction, lose our way.”

Blinken also warned China that any attempt to attack the Philippines in the South China Sea would invoke a mutual defence treaty that the United States and the Philippines signed 70 years ago.

“We also reaffirm that an armed attack on Philippine armed forces, public vessels, or aircraft in the South China Sea would invoke U.S. mutual defence commitments under Article IV of the 1951 U.S.-Philippines Mutual Defense Treaty,” Blinken said in his July 11 statement.