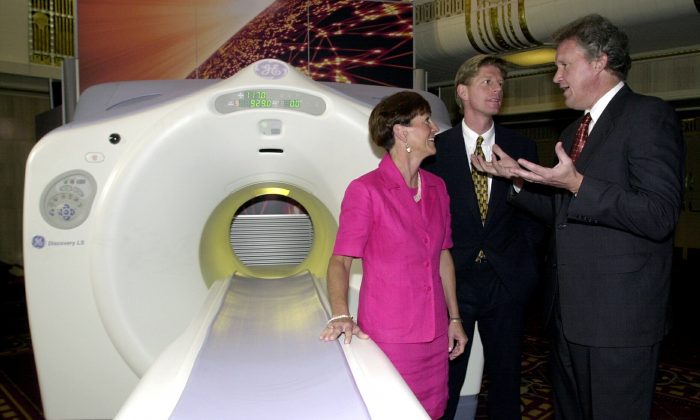 A patient has to be given radioactive material before undergoing a PET scan. After the scan, patients are radioactive for a period of time and should avoid close contact with others. (Henny Ray Abrams/AFP/Getty Image)
Health

Can Radiated Patients Spread Radiation to Others?

How careful do patients have to be following nuclear diagnostic tests or after radiation for the treatment of cancer? How long do these nuclear materials remain in their bodies? And how long will this radiation remain detectable and transmissible to others?

A report from Johns Hopkins University several years ago said that patients who have been radiated must be made aware that they can pass radiation to others. The problem is that nuclear diagnostic tests are not going to go away. Unless we develop other means of diagnosis, these tests will increase in the years ahead.

During scans to detect thyroid disease, coronary troubles, and cancer, radioactive drugs are injected, taken orally, or inhaled. Gamma cameras or positron emission tomography (PET) scanners can then detect this energy and use it to produce images on a computer.

Because of this exposure to radiation, doctors advise patients to be certain to wash hands well after using the toilet. And they advise that it’s also important to flush the toilet twice to get rid of any radioactive material.

Internal radiation is another matter, especially when patients with prostate cancer are treated by brachytherapy. During this procedure, radioactive pellets are inserted into prostate tissue. These tiny pellets, about the size of a grain of rice, are placed around and into the tumor.

The Johns Hopkins report said that if low-dose temporary pellets are used, patients require a hospital stay. During this time, they should have limited contact with family members. Friends should stay for only 10 to 30 minutes, and pregnant women should stay away.

But it’s still another story if doctors implant permanent brachytherapy implants. These gradually degrade over time and require greater precautions. Radiation experts say patients should not hug family members or others who want to wish them well for a few days following implantation. And for six months, they should keep 6 feet away from children and pregnant women.

Today, radioactive iodine is also used to treat hyperthyroidism (an overactive thyroid) and thyroid malignancy. In this situation, for the first week after treatment, the patient must sleep alone, use separate towels and dishes, and wash clothes separately.

Patients must also remember this important fact but are often not told about it: Long after they can safely make contact with others, residual radiation in the body can set off sensitive alarm systems.

Following a bone or thyroid scan, the body emits radioactivity that can be detected for up to three days. Scans of the heart can set off an alarm for up to 51 days, and following iodine therapy, this can occur for three months.

But how often are patients advised that they are radioactive? The Journal of Nuclear Medicine recently reported that a survey of 66 health care facilities revealed that often patients had no idea they were emitting radiation.

Nor do patients often know how much radiation they’re receiving from common diagnostic procedures. In fact, even the doctors who order these tests often have no idea of the radiation exposure to patients, or if asked how much radiation is received, grossly underestimate the amount of exposure.

For instance, a survey showed that 94 percent of pediatricians who ordered a CT scan were unaware of the radiation exposure received by children. They did not know that because children’s organs were more sensitive, a single CT scan of the stomach is equivalent to more than 4,000 X-rays. In effect, children were often being exposed to levels of radiation that are believed to cause cancer.

I’ve argued we should all have a radiation card outlining our exposure over a lifetime, but so far, no one is listening.