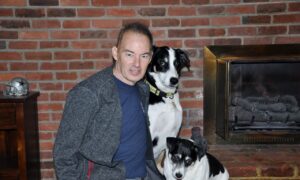 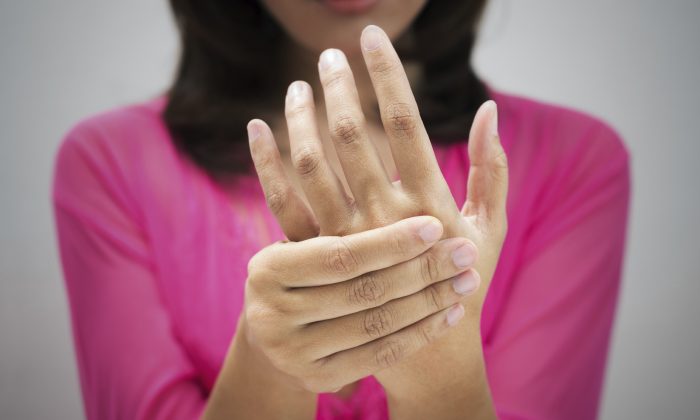 A stock photo of a wrist and hand (iStock)
Mind & Body

Clinical trials set to begin in US
By Arleen Richards
Print

NEW YORK—If you suffer from rheumatoid arthritis, you might be glad to know that research on using electricity to treat this debilitating disease is set to begin clinical trials later this year in the United States.

For nearly 20 years, researchers at the Feinstein Institute for Medical Research in Manhasset, N.Y., have been studying how electricity can be delivered automatically through the nervous system directly to organs in the body for treatment of inflammatory diseases, with minimal side effects.

Called bioelectronic medicine, this emerging therapy requires implanting an electrical device about the size of the tip of your pinky beneath the skin and onto the vagus nerve, a cranial nerve that runs from the brainstem to the abdomen and is commonly used in nerve stimulation treatments for brain disorders.

The device was developed by SetPoint Medical, a biomedical technology company based in Valencia, Calif. It is designed to deliver programmed electrical impulses directly to the spleen, a key immune organ.

If the trials are successful, patients might not have to remember to take pills anymore.

How Nerves Communicate With Organs

Other nerve stimulation devices have been in use for years to treat diseases like epilepsy and Parkinson’s, and these devices use the vagus nerve to send signals directly to the brain.

But the brain also uses the vagus nerve to send electrical signals to the body.

“There are two branches of the vagus, one on each side of your neck,” said Chris Czura, Ph.D., vice president of scientific affairs and an investigator at the Center for Bioelectronic Medicine at the Feinstein Institute.

But the main branch of the vagus nerve runs “from the base of your brain, through your neck, through your chest, and into your abdomen,” he said.

It touches major organs along the way to the abdomen. “For example it [the vagus nerve] goes to the heart, to the lungs and from there it begins to branch to the spleen, to the intestines, to the liver, to the kidneys,” he said.

But when the brain’s signals through the vagus nerve stop working adequately, your immune system acts abnormally, leading to chronic inflammation.

These researchers discovered that delivering an electrical signal directly to the spleen, can train the immune system to behave differently.

The same therapy—targeting the spleen—may relieve inflammation caused by Crohn’s disease as well.

Right now, treatment for rheumatoid arthritis typically involves painkilling drugs and steroids. In severe cases, patients may take genetically engineered proteins or undergo surgery. These methods involve minimizing or eliminating inflammation, but none of them can cure the disease.

In many cases, the drugs do more harm than help by meandering into other areas of the body where they’re not needed, according to Czura.

“Our goal would be to do away with drugs or augment drugs and provide therapeutic avenues for patients so we can get around side effects,” Czura said about treating with bioelectronic therapy.

In many cases, drugs do more harm than help.

And he’s optimistic that patients can get closer to being cured. Clinical trials have already started in Europe and Czura said SetPoint reported remarkable success, although data has not been officially released.

In its first pilot study in humans in 2012, SetPoint reported that two out of the eight study participants  achieved disease remission and the other six responded positively. These results are on par with drug therapies, according to the SetPoint website.

Czura and his colleagues plan to use the new facility to expand their research into treatment of other diseases that affect the body such as diabetes, paralysis, and cancer.

The pledge is part of the governor’s proposed budget and is subject to state legislative approval.