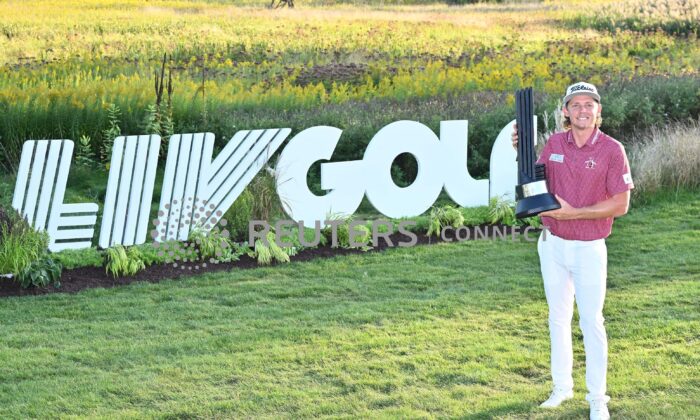 Cameron Smith poses with the trophy after finishing with a –13, to win the Invitational Chicago LIV Golf tournament at Rich Harvest Farms in Chicago, Ill., on Sept. 18, 2022. (Jamie Sabau/USA TODAY Sports via Reuters)
Golf

Cameron Smith, who claimed his maiden LIV Golf victory on Sept. 18, said a decision on whether he and other competitors on the Saudi Arabia-backed series will receive world rankings points needs to be made soon.

LIV Golf, which held its fifth event this week in Chicago, applied for recognition in golf’s world rankings—which play a key role in deciding entry into golf’s four majors—in July and their file remains under review.

Smith was one of 12 major champions in the 48–player LIV Golf field this week at Rich Harvest Farms where he secured a three-shot win.

“I suppose there’s a lot on the line with the ranking points, getting into majors, stuff like that,” Smith, who earned exemption into golf’s four majors for at least the next five years with his win at the British Open in July.”

“There needs to be [a resolution] quite soon, I think. The field here is strong enough and deep enough to where it warrants that, and hopefully it’s soon.”

LIV Golf has lured players away from the PGA Tour with staggering sums of money but the financial windfall could come at a cost for those still looking to compete in the Masters, PGA Championship, U.S. Open and British Open.

Organisers of the majors have not changed their qualifying rules but Smith, who earned $4 million for his LIV Golf win and is ranked third in the world, could one day find himself on the outside looking in as, for now, he can no longer earn world ranking points.

Smith won two of the biggest events on the PGA Tour schedule in 2022 having triumphed at the Players Championship and British Open and the Australian acknowledged he felt pressure to deliver early in his LIV Golf career.

“I feel as though I needed to prove to myself and probably more so to other people that just because I’ve changed tours doesn’t mean I’m a worse player for it,” said Smith.

“I’m still out here to win. That’s what we’re all here for. Hopefully we can keep this going.”