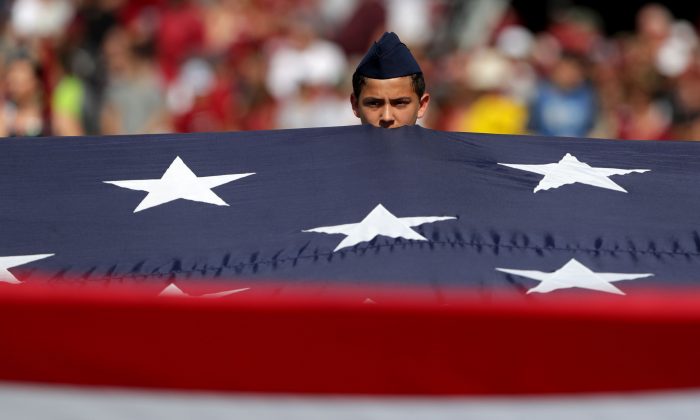 The American Flag is held during the National Anthem before a game on Sept. 23, 2017, in Columbia, South Carolina. (Streeter Lecka/Getty Images)
US News

“The Star-Spangled Banner” should be dropped as the American national anthem because it’s “racist,” says the president of the National Association for the Advancement of Colored People (NAACP) in California and Hawaii.

The regional head of the black advocacy organization, Alice Huffman, brought up the idea at a recent NAACP state convention.

“We’re protesting this racist song that has caused so much controversy in America, and we’re just trying to get it removed,” she said, WMTW reported. “So, whatever comes out in the future as a national anthem, we can all stand proudly and sing it.”

The California NAACP wants to introduce a resolution to state lawmakers that proposes abolishing the current national anthem.

Huffman said the NAACP has nothing against the flag the early 19th-century song celebrates. Her beef is with the song’s third stanza, which is less known because only the first stanza is commonly sung.

“And where is that band who so vauntingly swore

That the havoc of war and the battle’s confusion,

A home and a country, should leave us no more?

Their blood has washed out their foul footsteps’ pollution.

No refuge could save the hireling and slave

From the terror of flight, or the gloom of the grave:

And the star-spangled banner in triumph doth wave,

O’er the land of the free and the home of the brave.”

“If you look at it, there’s no way you can think it meant anything great for African-Americans,” Huffman said, apparently referring to the lines about “the hireling and slave” upon whom the author wished “terror of flight, or the gloom of the grave.”

The author, however, didn’t refer to hirelings and slaves in general, but to a very specific group, explained Mark Clague, musicologist and professor of music history, American culture, African and Afro-American studies, and entrepreneurship at the University of Michigan in a 2016 CCN op-ed.

The lyrics of “The Star-Spangled Banner” were written by Francis Scott Key, a lawyer and an amateur poet. In 1814, Key witnessed the bombardment of Fort McHenry by British gunships during the Battle of Baltimore.

The defenders faced overwhelming odds. But as the shells and Congreve rockets burst in the air, illuminating the battlefield, Key saw one of the fort’s storm flags was still standing. In the morning it was replaced with a large flag, signaling the defenders succeeded. Key was so moved by the scene, he captured it in a poem he wrote down on the back of a letter he had on himself.

The attacking troops largely consisted of British mercenaries (hirelings) but also of the Corps of Colonial Marines, who were escaped black slaves. The British had promised the slaves freedom, and later delivered on that promise.

But escaped slaves fought in the American military too. Key saw the slaves fighting for the British as traitors, Clague said, no better than the Brits themselves, who, as Key put it, swore “havoc of war and the battle’s confusion” to deprive Americans of a “home and a country.”

Based on his biography, Key saw slavery as immoral, Clague said, but also went with the flow of the legal system that, at the time, enshrined the practice. He inherited seven slaves and freed at least four of them. In court, he represented some slave owners who sought to keep their slaves but also slaves who sought freedom, whom he served pro bono. He also founded the American Colonization Society, which bought slaves and offered them free passage to Africa, although that approach was problematic, since most black slaves of the time were born in America and had never even been to Africa.

“Key was not an abolitionist, yet he was not an ardent supporter of slavery either and is better understood as one dedicated to ending slavery,” Clague said.

Clague encouraged Americans to go beyond “rote singing” of the anthem to learning about the history that gave birth to it and to learn both from the glories and faults of their ancestors.

“America’s history and thus America’s anthem can be powerful tools to achieve a better understanding to learn about ourselves and to imagine a better collective national future,” he said.