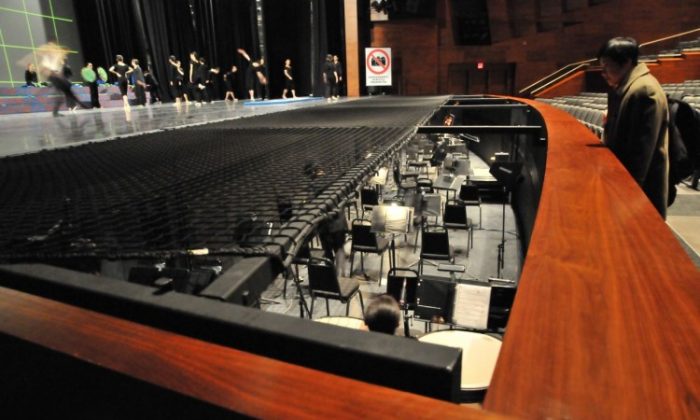 A safety net that’s not safe—that was the issue at the centre of a recent meeting between Alberta government representatives and the Falun Dafa Association of Calgary.

Klimchuk has attributed the cancellations in part to a “contractual issue” surrounding the use of a safety net at the Southern Alberta Jubilee Auditorium in Calgary that theatre management insisted was needed to keep Shen Yun dancers safe.

However, the local organizers claim it was because they went to the media after repeated attempts to bring their concerns about the safety net and ongoing “professional misconduct” from Southern Alberta Jubilee Auditorium staff to the attention of Klimchuk’s department.

Calgary show organizers said this week they were pleased to finally get a chance to meet with government representatives to explain that the net itself is a safety hazard because of the visual obstruction it causes.

These cues are so important that even a microsecond’s delay or a subtle miscommunication due to the presence of the net can disrupt the performance.

“We were glad to finally get a chance to state our case,” said Jenny Yang of the Falun Dafa Association of Calgary, noting that the group has made about a dozen requests to meet with government representatives over the last two years to no avail.

“The safety of the performers in paramount, and we’re happy the government has taken the time to meet with us as we believe they now understand the impacts of this net.”

The issue comes down to the unique nature of the Shen Yun performance, which includes tight coordination between the dancers on stage, the technical personnel controlling the animated backdrops, and the conductor and orchestra.

Any break in this chain can make the challenging moves performed by the Shen Yun dancers unsafe. The net installed by the theatre and its support beams block the conductor’s vision, making vital cues and communication nearly impossible.

These cues are so important that even a microsecond’s delay or a subtle miscommunication due to the presence of the net can disrupt the performance, according to the organizers.

“The split-second synchronization between the animated backdrop, the dancers on stage, and the music becomes challenging, if not impossible,” reads a submission to the government by the Calgary Falun Dafa Association.

“At the very least, this could stress the dancers, distract them, or cause them to miss a step
and have to rush to catch up while performing some very challenging jumping, flipping, and tumbling movements. This creates a dangerous situation for the dancers.”

The submission also notes that the Shen Yun orchestra features traditional Chinese instruments, which are introduced to the audience during the show. The net, which covers 2/3 of the orchestra pit, blocks this interaction.

The orchestra musicians have complained that the net is “culturally insensitive” and makes them feel as if confined “in a cage.In urging the government to reinstate the shows, the organizers say the Shen Yun artists are highly skilled professionals and the company has gone to great lengths to ensure the safety of the performers within the design and execution of the show.

In 1,500 performances, there hasn’t been a single incident of a performer falling from the stage.

Tom Thackeray, assistant deputy minister in the government’s Cultural, Community and Voluntary Services Division, told the organizers at the meeting they can expect a decision in the near future on whether the Shen Yun shows will be reinstated.”