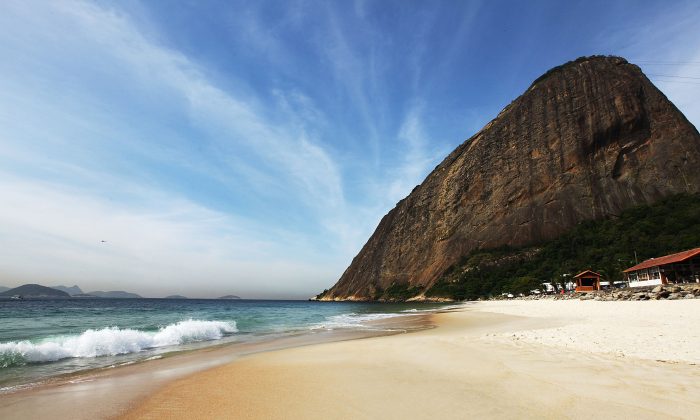 General view of the beach near the England national team training ground, at the Urca military base (Forte de Urca) beach, on May 22, 2014 in Rio de Janeiro, Brazil. The 2014 FIFA World Cup begins June 12 in Brazil. (Mario Tama/Getty Images)
Americas

By Sticking to Stereotypes Brazil Is Missing Its Chance to Rebrand

If you haven’t heard the song by now, you soon will; Mas Que Nada by Sergio Mendes and Brasil 66 will be a big part of this summer’s soundtrack. As the World Cup in Brazil fast approaches, the 1963 Jorge Ben number is on tv, in adverts, cafes, bars—in fact, everywhere.

One translation of the song’s title is “whatever,” a perfect country slogan for a track that seems to personify the stereotypical view many of us have of Brazil and Brazilians. Hosting the tournament won’t change the deeply ingrained image we have: music, sunshine, smiles, beaches, cocktails, sexy girls and hunky guys.

Even during the Rio de Janeiro Olympic Games handover ceremony at London 2012, the Brazilian authorities drew heavily on the world’s cultural associations with the country. Despite prior assertions to the contrary, we were still presented with “250 dancers and musicians—many of them samba fans.” Hardly a move designed to break down walls and challenge stereotypes.

Yet this image appears to work well for Brazil: around 6 million tourists visit the country each year; Rio’s annual carnival generates £570 million in expenditure; while the country’s tourism ministry believes the World Cup may attract an additional 3.7 million tourists into the country, each of whom is expected to spend an average of $2,488.

Sun, sea, samba and smiles—what a great brand for a nation to have. Or is it?

Many Brazilians actually feel these stereotypes are strangling the country and its development. In other words, there is more to Brazil than the rest of the world realizes.

Almost as an entrée to the new, 21st century “Brand Brazil,” at the Federations Cup last year we witnessed a different kind of Brazil playing national team football. Gone were the smiles of Ronaldinho and the charisma of Socrates, to be replaced by the aggression of Real Madrid fullback Marcelo and the muscular approach of the perfectly-named Zenit St. Petersburg striker Hulk. A review by noted football tactics blogger Zonal Marking of the tournament’s final, when Brazil played Spain, was littered with words such as “pressing,” “directness,” “ruthless,” “immediacy,” and “defensive.”

This is hardly the view many of us have, either of Brazilian football or of Brazil in general. Yet the football team’s emergence as something much more physical, focused and professional is seemingly a metaphor for the country’s economic development. Brazil is more than a seaside paradise: it is currently the world’s seventh largest economy, in terms of both nominal gross domestic product and purchasing power parity (what your money can actually buy).

The World Bank hails Brazil’s “strong domestic market” and its resilience towards external crises, while it highlights “stable economic growth, relatively low inflation rates and improvements in social well-being.” At the same time, Forbes magazine places 36 Brazilian businesses in its annual ranking of the world’s top 2000 public companies, the largest of which is Petrobras, an oil and gas corporation roughly the size of Gazprom, with more assets than BP.

Surely Brazil therefore deserves that we revisit our stereotypes; this is not a country living on beaches and in bars.

Time for a Rebrand?

Governments, businesses and global institutions are taking nation branding increasingly seriously. At one level, a national brand is linked to reputation and serves to highlight a country’s distinctiveness. Germany is efficient and reliable; Italy has passion and flair.

But, as with a biting Marcelo tackle, a serious “national brand” is not what most of us expect from, or love about, Brazil. The country may have become a major player in the global economy, but its image lags far behind. Just as fans will inevitably tune in to the World Cup this summer to enjoy “samba football,” so many of us will continue to misrepresent Brazil and its economy.

The problem is, Brazil is hardly innocent, happy to play up to these stereotypes when marketing itself around the world (as the London Olympics closing ceremony proved). Hence the pressure is on to ensure that football fans, tourists and people across the world are presented with more than the Copacabana and Sergio Mendes over the next month or so.

There is an additional imperative: over the last 12 months Brazil has been depicted as a nation riddled with inequality, crime and civil unrest. The country thus needs to ensure that blood, violence and destitution are not the benchmarks against which the new Brazil is judged.

Whether or not Brazil and its government is up to this double challenge remains to be seen. But with the nation’s presidential elections due to begin during the World Cup, there is a clear opportunity for the country to sing a different song to Mas Que Nada. After all, “whatever” is no longer an accurate description of 21st century Brazil.

Simon Chadwick is a “Class of 92” professor of sports enterprise at the University of Salford in the U.K. This article was originally published on The Conversation.