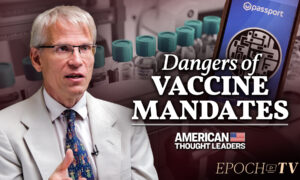 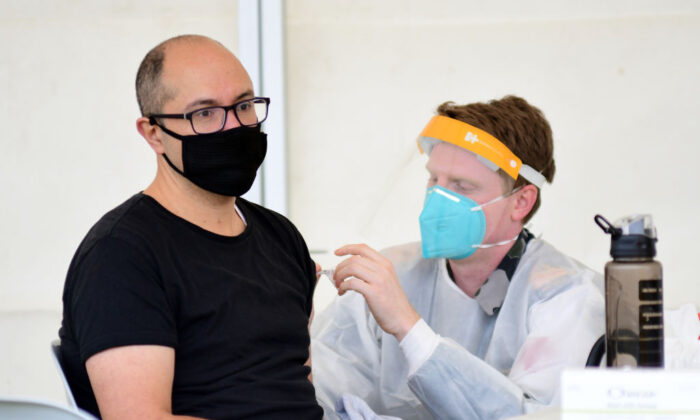 A man receives a dose of a COVID-19 vaccine at a newly opened vaccination hub in Dubbo, Australia, on Aug. 21, 2021. (Belinda Soole/Getty Images)
Australia

Business Support for Mandatory Vaccinations Is Split in Australia

An Australian survey of over 700 businesses found that support for mandatory COVID-19 vaccinations in the workplace is split down the middle, making it a contentious issue.

Australian Industry Group (Ai Group) conducted a pulse survey earlier this month and found that 24 percent of the businesses surveyed said they would like mandated COVID-19 vaccinations for some or all employees.

A further 27 percent would only want a COVID-19 vaccination mandate if it came from health authorities.

“[The pulse survey] found that more than half were in favour of some form of mandating,” Ai Group CEO Innes Willox said.

Of the remaining respondents, 37 percent preferred to encourage optional vaccines, and 10 percent were unsure or said it did not apply to their workplaces.

Willox has previously said mandates would only be appropriate for some workplaces and not all. However, he also noted that businesses in favour of the health orders would “no doubt” want legal certainty to support their decisions.

“However, governments do not appear to favour any significant expansion of the small number of such health orders now in place,” he said.

Businesses will also be keeping a close eye on those that have already given directives for mandatory vaccinations, such as SPC and Qantas, and assess what approaches would be considered lawful and reasonable.

“Employers will initially look at the issue from the perspective of how they can protect their staff and their customers,” Willox said. “As more businesses mandate vaccination, the question will shift to whether they will need to mandate vaccination for their own staff who visit businesses that have a mandate in place.”

The Fairwork ombudsman recently updated its guidelines to outline when mandated vaccines would be considered lawful and reasonable, giving businesses some clarity.

Mandates for employees such as quarantine workers, border patrol, health care workers, and aged care workers are more likely to be considered reasonable.

“Well, if we were to take that step, … that would be thereby endorsing some sort of mandatory process,” Morrison told reporters on Aug. 9.

Instead, the government is strongly encouraging the public to get their vaccinations through the plan of easing the existing heavy restrictions once 70 to 80 percent of the population is vaccinated.

However, the prime minister is facing some resistance over the plan, that had been agreed upon in July, from Queensland and Western Australia state governments.

“We’re signed up and committed to the plan that national cabinet endorsed, but that was a plan that was endorsed before the NSW outbreak,” Queensland deputy premier Steven Miles said on Sunday.

Meanwhile, Western Australia has suggested that it will continue to commit to its elimination strategy.