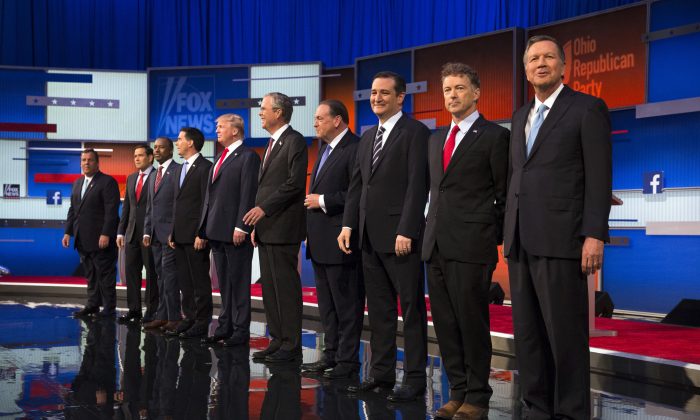 MILWAUKEE—Republicans Jeb Bush and Ben Carson sought to steady their presidential campaigns in Tuesday night’s GOP debate, with Bush taking advantage of a policy-focused contest to detail positions on the economy and immigration while Carson swatted away mounting questions about the veracity of his celebrated biography.

“I have no problem with being vetted,” said Carson, a quiet-spoken retired neurosurgeon. “What I do have a problem with is being lied about.”

The debate, the last for the GOP until mid-December, left the crowded GOP field jumbled with less than three months until primary voting gets underway. After a furor over moderators’ aggressive tone in the last debate, Tuesday’s hosts from Fox Business Network allowed the eight candidates to deliver lengthy, uninterrupted answers and avoided attempts to get them to engage with one another.

Bush entered the debate in a precarious position, desperate to ease the anxiety of donors and other supporters. While it’s unclear if his competent performance Tuesday night will be enough to reset his campaign, he highlighted his fluency on domestic policy issues and described himself as best prepared to take on Democratic front-runner Hillary Rodham Clinton in a general election.

In one of the night’s notable exchanges, Bush stood by his plan for allowing some people living in the U.S. illegally to have a path to legal status, an unpopular position with many Republicans. He criticized billionaire Donald Trump’s call for mass deportations as an impractical plan that would hand Democrats a talking point as they seek to appeal to Hispanic voters.

Bush was backed by Ohio Gov. John Kasich, who at times sought to be the voice of experience and moderation. On Trump’s immigration plan, he said, “We all know you can’t pick them up and ship them across, back across the border. It’s a silly argument.”

Bush avoided tangling with fellow Floridian Marco Rubio, a shift in strategy after his poor performance in the last debate. Rubio had another strong performance, sticking to his strategy of weaving his own compelling personal story into his policy discussions and taking an aggressive stance on foreign policy.

Rubio got a pass from moderators on immigration, an issue that is potentially problematic for him given his role in writing legislation that would have provided a path to legalization. Rubio did face criticism from some rivals, most notably Kentucky Sen. Rand Paul, about whether he’s a true conservative given his calls for increasing the child tax care credit and boosting military spending.

“We can’t even have an economy if we’re not safe,” said Rubio, a first-term senator enjoying recent momentum for his White House bid.

Rubio’s call for more military spending was backed by Trump, the real estate mogul who has led the GOP field for months. While Trump has generated attention through his outspoken statements on the campaign trail, he delved into the policy discussions in Tuesday’s debate, including outlining his opposition to a new Asia-Pacific trade deal supported by many Republicans.

Trump’s grip on the GOP field has been challenged in recent weeks by Carson, another outsider appealing to voters angry with Washington. As Carson has risen in preference polls, however, he has faced a flurry of questions about his biography, which has been central to his connection with voters.

The questions ballooned last week after CNN reported it could not find friends or confidants to corroborate the story, told in his widely read autobiography, of his trying to stab a close friend when he was a teenager.

Carson was cheered by the debate audience when he suggested he was facing tougher scrutiny than Clinton. But he appeared to flounder on some policy questions, including a disconnected answer about whether he would break up big banks.

Texas Sen. Ted Cruz repeatedly played the populist. He railed against the “Washington cartel,” big government and even big banks. But in moment reminiscent of a former Texas Gov. Rick Perry’s “oops” debate debacle, Cruz blanked when it came to naming the five departments he would eliminate.

Kasich and businesswoman Carly Fiorina, two lower polling candidates in search of a breakout moment, repeatedly sought to interject themselves into the discussion. Trump sought to shut Fiorina down at one point, drawing jeers from the crowd when he said, “Why does she keep interrupting everybody?”

Bush had perhaps the most on the line. The brother and son of presidents, he was widely viewed as the early front-runner in the race and has raised enormous sums of money for his super PAC. But he’s proved to be an awkward campaigner and has sometimes appeared out of step with a Republican electorate eager to voice its frustration with the political class.

Smaller Cast of Republican Candidates to Face Off in Debate

While Bush still showed signs of nerves, he was more confident and at ease than in previous debates. When Trump at one point suggested the moderators let Bush answer a question, he responded with a tinge of sarcasm: “Thank you, Donald, for allowing me to speak at the debate. That’s really nice of you. Really appreciate that.”

“Freedom needs a champion, and Cliff sees Marco as the most articulate on that,” said Mina Nguyen, a spokeswoman for Asness.

Missing from the lineup in the main debate were New Jersey Gov. Chris Christie and former Arkansas Gov. Mike Huckabee. Both were dropped from the top-tier debate with low poll numbers in national surveys, sparking criticism for the way networks hosting the debates have determined participation.

Christie and Huckabee instead appeared in an undercard debate, along with Louisiana Gov. Bobby Jindal and former Pennsylvania Sen. Rick Santorum. Christie tried to cast himself as well-prepared for a general election, focusing more on Clinton than fellow Republicans.

“She believes she can make decisions for you better than you can make them for yourself,” Christie said of Clinton.