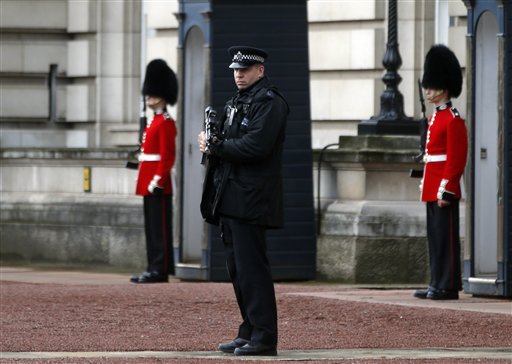 A British police officer guards the grounds of Buckingham Palace in central London, Monday, Oct. 14, 2013, after British police arrested a man, David Belmar, with a knife after he tried to dart through a gate at Buckingham Palace in London on Monday. The palace said Queen Elizabeth II was not in residence. Breaches of royal security are rare, but just a month ago police arrested two men over a suspected break-in at the palace. (AP Photo/Lefteris Pitarakis)
UK

A group of protesters have climbed on the roof of Buckingham Palace in England as part of a “Fathers Justice” demonstration. The group confirmed the protest on Facebook.

Update: Image of two men from #Fathers4Justice on the roof of Buckingham Palace. pic.twitter.com/0RowlHCDXp

Two protesters are currently on the royal residence after scaling the building after 4 p.m. local time, the Mirror reported.

Police are now on the scene, and the situation is ongoing.

A Met Police spokeswoman confirmed with the paper: “Two people are on the roof and we are currently speaking to them.”

Protesters have climbed on to a roof at Buckingham Palace https://t.co/4RLsjOOooP pic.twitter.com/f1O1urQC8p

Stop the War on Dad’s protesters have scaled a roof in the grounds of Buckingham Palace. #stopthewarondads pic.twitter.com/yW2pUmSwuz

Parenting group Fathers Justice said on Facebook said protesters Bobby Smith and Martin Matthews were on the roof. The group posted a video of the incident.

A message said: “Fathers rights protesters climb into BUCKINGHAM PALACE IN PROTEST OF FATHERS NOT SEEING THEIR CHILDREN #‎stopthewarondads #‎newfathers4justice “

The Mirror noted Queen Elizabeth II and the Duke of Edinburgh have not been at Buckingham Palace this afternoon or in the evening.

Specifically, the men are on top of the Queen’s Gallery. The gallery contains a range of Royal Collection treasures, including portraits of Queen Elizabeth.

According to the British Monarchy’s website, Buckingham Palace “has served as the official London residence of Britain’s sovereigns since 1837 and today is the administrative headquarters of the Monarch.”

The palace has “775 rooms. These include 19 State rooms, 52 Royal and guest bedrooms, 188 staff bedrooms, 92 offices and 78 bathrooms. In measurements, the building is 108 metres long across the front, 120 metres deep (including the central quadrangle) and 24 metres high.”

More than 50,000 people visit the palace each year, the website noted.