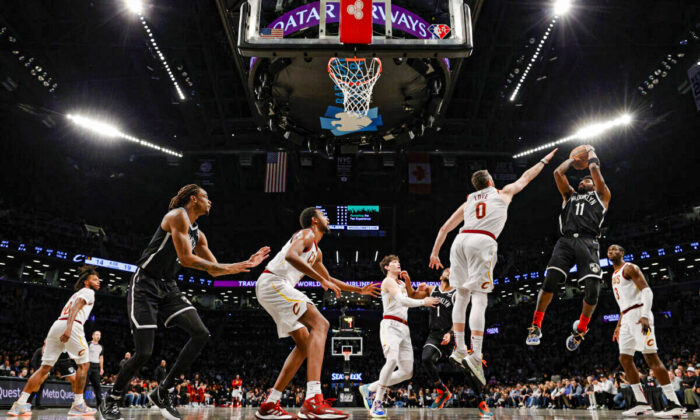 Kyrie Irving #11 of the Brooklyn Nets goes to the basket as Kevin Love #0 of the Cleveland Cavaliers defends during the Eastern Conference 2022 Play-In Tournament at Barclays Center, in the Brooklyn borough of New York, on April 12, 2022. (Sarah Stier/Getty Images)
NBA

The Brooklyn Nets held a moment of silence during the pre-game activities against the Cleveland Cavaliers for the victims of the subway shooting on Tuesday, stating that they were donating $50,000 to those that were injured. The Nets won the game 115–108, giving them the No. 7 seed in the Eastern Conference playoffs.

Before the game, the Nets thanked the first responders of the incident, and extended a wish to the injured for a speedy recovery; along with their announcement of the donation, in cooperation with a contribution from the New York Liberty Foundation.

The shooting happened at the subway station closest to the Nets’ training center in the Sunset Park neighborhood.

A suspect, Frank James, was arrested on the following day on Wednesday at 1:42 p.m. by New York police officers at the corner of St. Mark’s Place and First Avenue in Manhattan.

“That’s the subway stop for our practice facility and for our office,” said Nets coach Steve Nash prior to the game. “My kids go to school not exceedingly far, so it does hit home and you just feel for all those affected and you recognize that we have a lot of growing to do as a society and a community, and you just feel for everybody in our community that was affected.”

The Nets requested that fans arrive earlier prior to the game, as increased security would be implemented at the arena as the police counterterrorism unit was placed at that subway station across the plaza from Barclays Center.

Cavaliers coach J.B. Bickerstaff stated that their organization also was thinking of all the people affected by the shooting.

“So that’s first and foremost, is keeping those people in our minds and whatever we can do to help there,” said Bickerstaff. “And then we go play a basketball game, and if it’s an extra 15 minutes on the trip or you’ve got to check your purse at the door, like, so be it, because people were impacted in a way bigger way than we ever will be.”

Kyrie Irving put on a dazzling shooting display en route to 32 points, powering the Brooklyn Nets to a hard-fought 115–108 victory over the Cleveland Cavaliers Tuesday in an Eastern Conference play-in game at New York.

The victory makes Brooklyn the No. 7 seed in the Eastern Conference playoffs, and the Nets will open their first-round series against the Celtics on Sunday in Boston. On Friday, the Cavaliers will host the winner of the Wednesday game between the Charlotte Hornets and Atlanta Hawks to determine which team will be the No. 8 seed and earn a first-round matchup with the Miami Heat.

Irving, a former Cavaliers guard, made his first 12 shots and also finished with a game-high 12 assists. He didn’t miss his first shot until 10 minutes remained in the game. Irving shot 12 of 15 from the field, 3 of 6 from the 3-point arc, and 7 of 7 from the foul line.

However, it was Brooklyn’s Kevin Durant who hit some crucial baskets in the fourth quarter after the Cavaliers pulled within six points.

Durant finished with 25 points, five rebounds, 11 assists, three blocks, and two steals. He has dished out 27 assists in the past two games.

Cleveland’s Darius Garland got hot in the fourth quarter and cut what had been a 22-point deficit to 88-82 with 8:43 left before Durant drained a 3-pointer.

A flagrant foul on Goran Dragic, who hit Garland in the groin, seemed to light a fire under the All-Star guard. Garland finished with 34 points and five assists.

Evan Mobley added 19 points and seven rebounds for the Cavaliers, while Kevin Love contributed 14 points and a game-high 13 rebounds.

Brooklyn held an 85–73 lead heading into the fourth quarter.

Despite the late charge, which saw the Cavaliers get within five points three times in the final seconds, Brooklyn held on.

The Cavs are expected to get Jarrett Allen back for Friday’s game. The All-Star center has been out since March 6 due to a broken finger.