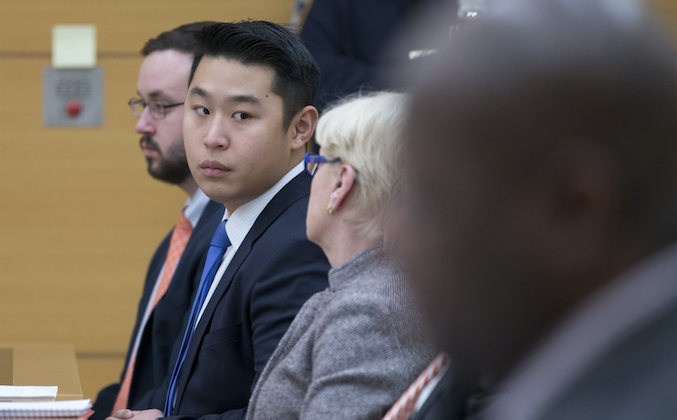 Police officer Peter Liang, second from left, sits with his legal team while waiting for charges to be read back to the jury in his trial on charges in the shooting death of Akai Gurley, Thursday, Feb. 11, 2016 at Brooklyn Supreme court in New York in New York. (Mary Altaffer/AP)
New York

Brooklyn DA on Peter Liang: ‘There is No Evidence He Intended to Kill’

The office for the District Attorney of Brooklyn has requested that former NYPD Officer Peter Liang serve no jail time in the shooting that killed Akai Gurley back in November of 2014.

D.A. Kenneth Thompson suggested Liang serve five years of probation, with six months confined to his home and 500 hours of community service, according to a statement from his office released on March 23.

When Mr. Liang went into that building that night, he did so as part of his job and to keep the people of Brooklyn and our city safe.
— Kenneth Thompson, Brooklyn District Attorney

Liang claimed he accidentally fired his weapon after reacting to a startling noise during a vertical patrol in a dark stairwell.

The fired shot ricocheted off of a wall and hit 28-year-old Gurley, who was on a lower floor. He was taken to an area hospital where he was pronounced dead.

Liang was subsequently found guilty of manslaughter and official misconduct back in February—resulting in his termination from the force.

In the statement, Thompson said:

“Peter Liang was indicted, prosecuted and subsequently convicted by a jury because his reckless actions caused an innocent man to lose his life. There is no evidence, however, that he intended to kill or injure Akai Gurley,

“When Mr. Liang went into that building that night, he did so as part of his job and to keep the people of Brooklyn and our city safe.

“As I have said before, there are no winners here. But the sentence that I have requested is just and fair under the circumstances of this case. From the beginning, this tragic case has always been about justice and not about revenge.”

Liang will be sentenced on April 14. If convicted, he faces up to 15 years behind bars.