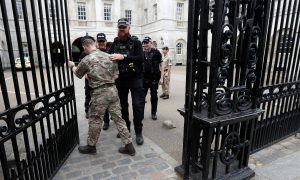 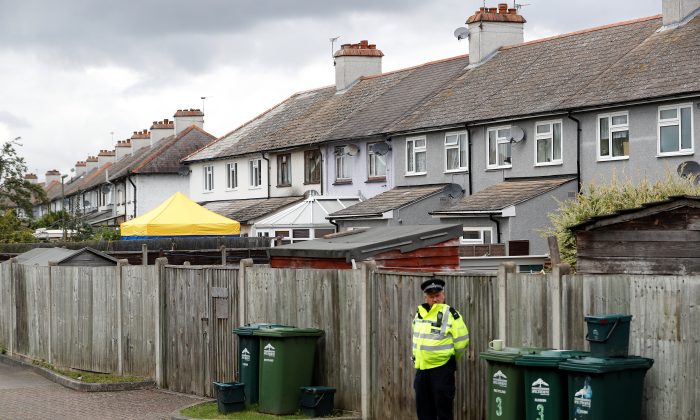 A police officer stands on duty at the back of a property being searched after a man was arrested in connection with an explosion on a London Underground train, in Sunbury-on-Thames, Britain, September 17, 2017. (Reuters/Peter Nicholls)
UK

LONDON—A second man has been arrested over Friday’s bombing of a London commuter train that injured 30 people and Britain remained on its highest level of alert on Sunday with soldiers helping provide security.

The 21-year-old man was detained under Britain’s Terrorism Act in the west London suburb of Hounslow just before midnight on Saturday, the Metropolitan Police said in a statement.

Police arrested an 18-year-old man in the departure lounge of Dover port earlier on Saturday in what they called a “significant” step and then raided a property in Sunbury, a town near London and about four miles (six km) from Hounslow.

The ISIS terrorist group claimed responsibility, as it has for other attacks in Britain this year, including two in London and one at a concert by American singer Ariana Grande in Manchester in May.

Interior minister Amber Rudd said on Sunday the second arrest indicated it was not a “lone-wolf” attack, but there was no evidence ISIS was involved.

“It is inevitable that so-called ISIS, or Daesh, will reach in and try to claim responsibility. We have no evidence to suggest that yet,” she told the BBC’s Andrew Marr Show.

“But as this unfolds, and as the police do their investigations, we will make sure that we find out exactly how he was radicalized, if we can.”

The bomb struck as passengers were traveling toward the center of the British capital. Some suffered burns and others were hurt in a stampede to escape. Health officials said none was thought to be in a serious condition.

Prime Minister Theresa May put Britain on its highest security level of “critical” late on Friday, meaning another attack might be imminent. Soldiers and armed police were deployed to strategic locations such as nuclear power plants.

The last time Britain was put on “critical” alert was after a suicide bomber killed 22 people at the Ariana Grande concert.

On that occasion, the threat level remained at critical for four days while police established whether the bomber had worked alone or with others. Prior to that it had not been triggered since 2007.