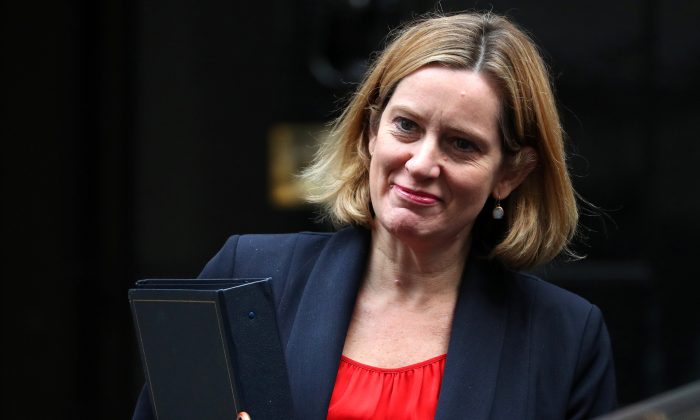 WASHINGTON—Britain’s top internal security official is pressing social media companies to devise automatic systems to spot and block violent terrorist messaging before it is posted on their networks.

Amber Rudd, home secretary in the conservative British government led by Prime Minister Theresa May, told an audience at New America, a Washington think tank, on Thursday night, Nov. 9, that there was an “online arms race” between terrorists and the forces of law and order.

Rudd said government authorities and companies were already working to ensure that terrorist messaging promoting violence should be removed from the internet within one or two hours of initial posting.

But she said companies should press ahead with development and deployment of artificial intelligence systems that could spot such content before it is posted on the internet and block it from being disseminated.

Since the beginning of 2017, violent terrorist operatives have created 40,000 new internet destinations, Rudd said. She noted that she visited Silicon Valley companies, including Alphabet Inc’s Google and YouTube, Facebook Inc and Twitter Inc, earlier this year and called on them to do more to take down or block terrorist content.

As of 12 months ago, social media companies were taking down about half of the violent terrorist material from their sites within two hours of its discovery, and lately that proportion has increased to two thirds, she said.

YouTube is now taking down 83 percent of violent terrorist videos it discovers, Rudd said, adding that UK authorities have “evidence” that the ISIS terrorist group was now “struggling” to get some of its materials online.

But she said there was “much more” companies can do to use cutting-edge technology to spot dangerous content more quickly.

She added that in the wake of an increasing number of vehicle attacks by terrorists, such as the one at London’s Borough Market earlier this year, British security authorities were reviewing rental car regulations and considering ways for authorities to collect more relevant data from car hire companies.