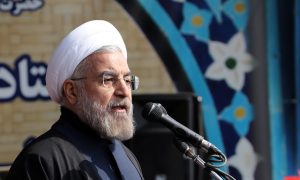 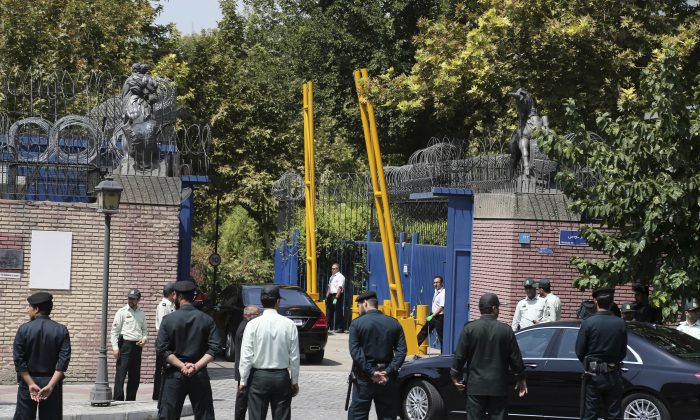 TEHRAN, Iran— Britain reopened its embassy in Tehran Sunday in a sign of newly thawed relations in the wake of a landmark nuclear deal between Iran and world powers.

British Foreign Secretary Philip Hammond attended the reopening ceremony and witnessed the raising of the Union flag over the compound. The embassy has been closed since November 2011, when it was stormed by demonstrators protesting the imposition of international sanctions against the Islamic Republic.

“Maintaining dialogue even under the most difficult conditions is crucially important,” Hammond said during a joint press conference with Iranian Foreign Minister Mohammad Javad Zarif. “So reopening the embassy in Tehran and the Iranian embassy in London is not just an important symbol. It’s an important practical channel for being able to engage on the very many issues that are of concern and the very many issues that we have shared interests.”

Zarif welcomed the reopening of the British Embassy, saying it showed Iran’s regional and global significance.

“This will be a new start in the relations of Iran and Britain which has seen several ups and downs over the past years. Today we have entered a new stage of ties based on mutual respect, policy of constructive interaction and dialogue,” he said.

But despite the mutual optimism on display, the reopening was greeted with open skepticism and hostility in some corners. The semi-official Fars news agency, which is considered close to Iran’s conservative camp, best captured the sentiment with the headline: “Den of fox reopened.”

A similar ceremony took place at the Iranian embassy in London. Several Iranian and British dignitaries, including former Foreign Secretary Jack Straw, were seen entering the embassy residence Sunday morning, but it was unclear exactly when the embassy would formally resume operations.

Terrorism, regional stability and the spread of the Islamic State group in Syria and Iraq are among the challenges Britain and Iran should be prepared to work together on, Hammond said. But he added that he also expected to two nations to continue having their share of public disagreements. The embassy building still bears some anti-British graffiti from the November 2011 protests.

“We are clear-eyed about what the future offers us. Big opportunities but we know that there will be areas where we continue to disagree, and sometimes disagree strongly. We won’t shirk from that,” he said. “The important thing is that now we have a channel to talk to each other and we will be talking about all the issues whether we agree with each other or not.”

The British Embassy would initially have a small number of staff with limited consular services, but officials expect to upgrade its leadership to full ambassador status in coming months.

Iranian hard-liners oppose the improved relations with London. Many of them had called the British Embassy the “epicenter of sedition” when they attacked it in 2011. They accused the country and its media, including the BBC, of fomenting unrest and encouraging rioters in Iran after the disputed 2009 presidential elections.

“Given concerns over efforts by the enemy to penetrate into Iran after the nuclear deal, it was not appropriate that the British Embassy in Tehran is reopened,” the hard-line daily Kayhan quoted him as saying.

Kowsari called on Iran’s security and intelligence agencies to carefully watch British Embassy operations and “prevent conspiracies by the British government before they are carried out.”

Some 50 demonstrators approached the British Embassy to hold a protest rally hours after it was reopened, according to an