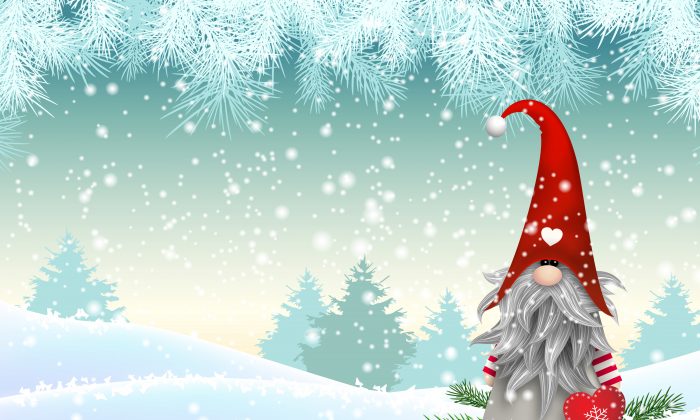 In honor of the season, let’s venture to Scandinavia: the home of well-nourished children and the elf-like Swedish Santas called tomten. Santa traditions vary widely all over the world, but when my family thinks of Christmas traditions rich with history, our minds always go to the red capped, gnome-like creatures of Scandinavia.

These small-statured Santas captured my children’s imaginations early on. They’re magically plausible in a way that the North American Santa just is not. There’s not just one tomte. The idea of more than one “Santa” bringing gifts to kids of the world simply makes more sense to my kids’ brains than one time-traveling guy who likes jumping down chimneys. Also, tomten don’t have to travel all the way from the North Pole. Lore has it that they live in nearby forests. I like to think that if there are tiny people living in the woods, they must live in my favorite of all domiciles: tiny houses. Just a thought.

Much like our traditional Santa Claus likes cookies and milk, the tomten also have particular dietary requests. Porridge. If a Swedish child forgets to gift their Tomte with a bowl of porridge, legend has it he could abandon the house, or even worse, cause a whole lot of Christmas mischief. (If you listen hard enough you can hear the collective shriek of Swedish parents. Please Tomte, no more Christmas mischief.)

But perhaps the difference between Santa’s chocolate chip cookies and Tomte’s porridge points to more than a variation in holiday traditions. It just might speak to the root of how North Americans and Scandinavians nourish their little ones.

In both regions, pediatricians agree that breastfeeding is the best option. It lowers a baby’s risk of developing allergies, gaining excess weight, and developing high blood pressure.

Two of three Scandinavian countries — Norway and Sweden — scored first and second place respectively in the 2012 Breastfeeding Policy Scorecard documenting the state of breastfeeding around the world. The rankings are based on maternity leave laws, right to daily nursing breaks, baby friendly hospitals, and policy support for breastfeeding practices, among other factors.

Of the 36 industrialized countries on the scorecard, the United States placed dead last.

The lack of institutional support for maternity leave would help explain the surprising finding that up to 74% of US infants were never breastfed. In many cases, it’s not that North American mothers don’t want to breastfeed; rather, their lifestyles simply make it impossible.

The lack of institutional support for maternity leave would help explain the surprising finding that up to 74% of US infants were never breastfed.

I stayed home to nurse when my children were young, but when my sister and I were infants, my mother had to work a full-time job. She would pump throughout the day in the office break room and drive to the daycare to nurse during her paid lunch breaks. She remembers it as an exhausting period, but worth it. Women who aren’t supported by their work and social environments — not given time to pump or take paid breaks — are often simply denied the option of breastfeeding. That’s unsettling when one takes into account the health benefits to an infant of breastfeeding.

Both North American and Swedish parents have alternatives they lean on when breastfeeding feels too labor intensive for one reason or another. Baby formula is the common alternative in the US. And in Sweden, the popular alternative is a porridge-like substance called välling.(Any connection to Tomte’s porridge? Maybe.) There is nothing wrong with parents choosing alternatives over breast milk — it’s often not really a choice, but something dictated by the mother’s body or family lifestyle.

Breast feeding takes extra effort. We are lucky to live in an age where many stay at home parents can bring in an income while at home, but being able to work from home is not a reality for every parent. Many working mothers and fathers don’t have schedules that allow them to execute a nursing or pumping schedule, while others simply don’t produce enough milk to nourish their little one. Contrary to recent rhetoric, mothers should never feel guilt about not being able to breastfeed. If she genuinely cannot do it, it is not her fault. The love and support of a husband or partner goes a long way in helping a woman overcome all of the complex feelings that arise around breastfeeding. Even though guys don’t produce milk, their ability to be present for their infant’s nutritional needs makes a world of difference.

Both Swedish and American experts agree that families who don’t face any major physiological or lifestyle barriers, and who are still on the fence about breastfeeding, should understand the benefits of natural breast milk before choosing to go with a substitute.

The health benefits of natural breast milk are immense — and that’s something that both Santa and Tomte can agree upon. Happy holidays to you and yours!

Healthy Food Ideas For Your Baby

Organic Baby Food DIY, You Can Do It (Infographic)