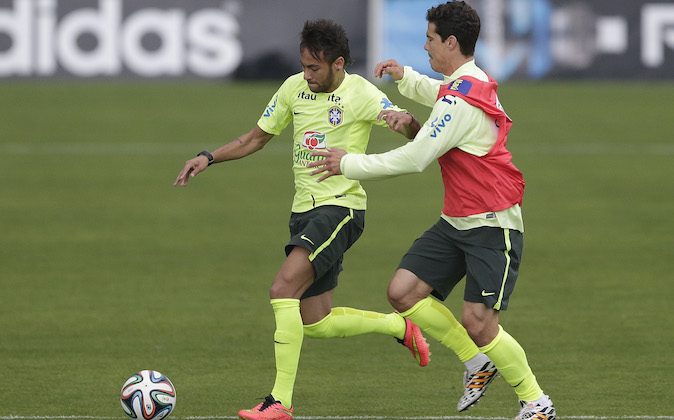 Brazil and Croatia will go head-to-head in the opening match of World Cup 2014 on Thursday, June 12.

The game will be broadcast on ESPN Brazil in Brazil, and ZDF and HRT 2 in Croatia.

Live stream is available on ITV Player and Watch ESPN for subscribers.

SAO PAULO— It’s almost time. The day Brazilians have been anxiously waiting for is finally arriving.

Brazil plays Croatia on Thursday to get the home World Cup underway, beginning its quest for a sixth world title almost seven years after the nation was picked as host.

After so much talk about delays, protests and problems, fans at last are getting a chance to cheer for the national team on home soil in football’s showcase tournament.

If Brazil wins the opening game, the fact that the stadium in Sao Paulo isn’t even fully finished yet will quickly be forgotten. A loss, quite simply, is unthinkable for a nation whose identity is so closely linked to its football team.

Brazil hasn’t hosted the World Cup since 1950, when it endured a heartbreaking loss to Uruguay in the last title-deciding game. This time, everybody knows that only the title will be enough to please the home crowd.

“We are all eager to get started, we are just counting the days,” Brazil midfielder Ramires said Tuesday. “We know that the fans have confidence in our team and they are behind us. We have to do everything possible to try to win this World Cup. We know everybody is expecting us to do it.”

Boosted by the home crowd, Brazil is one of the main favorites to recapture the trophy won by Spain four years ago in South Africa. But the other usual World Cup contenders will be trying to spoil the party in the land of football, including Germany, Italy, Argentina and the Netherlands, runner-up in 2010.

Brazil is trying to become the first nation to win the World Cup at home since France did it in 1998. The Brazilians were eliminated in the quarterfinals of the last two tournaments, to France in 2006 and the Netherlands in 2010.

A festive World Cup atmosphere has taken over Brazil in the run-up to the tournament despite the country’s preparation problems and the threats of protests. Brazilians had been slow to get into the World Cup mood, but now streets are being painted with the green and yellow colors and local flags are being displayed on windows of homes across the country.

The crowd support is one of the biggest reasons coach Luiz Felipe Scolari has been saying loud and clear that Brazil is obligated to win the World Cup at home. Players also don’t hide that they believe Brazil is the main title favorite.

“We know that we will have the fans behind us, and together I think we have a great chance of reaching our final goal, which is to win the World Cup,” Brazil starting midfielder Luiz Gustavo said.

Brazilian fans had been questioning the national team before last year’s Confederations Cup, but the title in the warm-up tournament was enough to bring the fans back on board. That tournament also helped show that Brazil has a team capable of competing against the top football nations today. The victory came in a final against world champion Spain.

“The Confederations Cup allowed us to regain our confidence,” said Scolari, the coach when Brazil won its last world title in 2002. “Now we have to repeat that during the World Cup.”

Brazil begins the tournament having won 15 of its last 16 matches, the only loss a 1-0 result at Switzerland in the first match after the Confederations Cup.

Brazil will start the World Cup with the same lineup that won the Confederations Cup, with 22-year-old Barcelona striker Neymar leading the team.

Croatia, led by Real Madrid playmaker Luka Modric, will hope to pull off a monumental upset, but the team won’t be at full strength against the hosts. Coach Niko Kovac won’t have forward Mario Mandzukic, who was red-carded in the team’s final qualifier, and experienced midfielder Niko Kranjcar, who had to be dropped from the squad because of a late hamstring injury. Novac was already without defender Josip Simunic, who was banned for 10 games by FIFA for leading fans in a pro-Nazi chant after a qualifying match.

The high-profile opening match will be played at the troubled Itaquerao, the construction of which was delayed so badly that the roof won’t even be fully finished until after the tournament. A crowd of more than 61,000 people is expected at the Itaquerao, including many heads of states.

The other Group A match will be played between Mexico and Cameroon on Friday in the northeastern city of Natal.