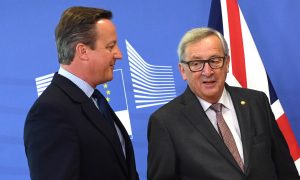 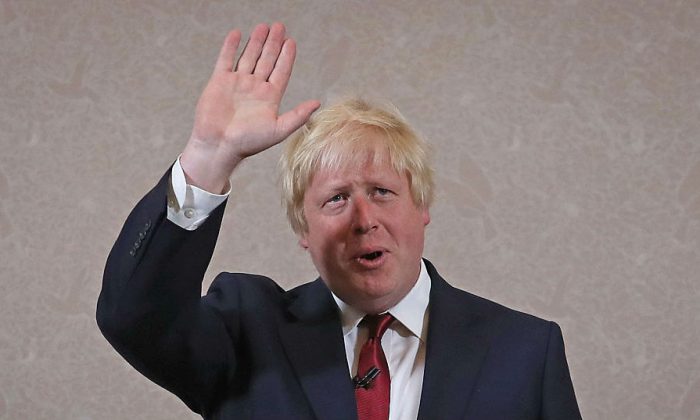 Former London Mayor and Conservative MP Boris Johnson waves as he speaks ruling himself out of becoming the next Conservative party leader at St Ermin's Hotel on June 30, 2016 in London, England.
International

The former London mayor dropped his campaign to become Conservative Party leader and prime minister after Justice Secretary Michael Gove abruptly withdrew his support for Johnson and announced he would run himself.

Johnson, a prominent campaigner for Britain’s withdrawal from the 28-nation European Union, told a news conference where he was expected to announce his candidacy that the next Conservative leader would need to unite the party and ensure Britain’s standing in the world.

“Having consulted colleagues and in view of the circumstances in Parliament, I have concluded that person cannot be me,” he said to the astonishment of gathered journalists and supporters.

Johnson paraphrased Shakespeare’s “Julius Caesar,” saying it was “a time not to fight against the tide of history but to take that tide at the flood and sail on to fortune.” It appeared to be a dig at Gove—the reference is to a line spoken by Brutus, the Roman leader’s ally turned assassin.

Others drew a more contemporary parallel.

Johnson’s departure makes Gove and Home Secretary Theresa May the favorites among five contenders to lead the Conservatives.

The decision by Johnson, 52, is an unexpected twist in a political career that saw him serve as journalist, lawmaker and mayor, building a public profile on Latin quips, cycling and rumpled eccentricity while nurturing a poorly concealed ambition to lead his country.

Johnson’s decision to break with longtime ally Prime Minister David Cameron and back the “leave” side in Britain’s EU referendum seemed to have paid off when Cameron announced he would resign after last week’s vote in favor of exiting the bloc.

Cameron’s announcement triggered a Conservative leadership race in which Johnson was expected be a front-runner, with Gove as his campaign manager.

The two men had campaigned together to yank Britain from the EU. But since their unexpected victory, they have been accused of failing to lay out concrete plans for Britain’s divorce from the EU.

Johnson addressed the issue in a Daily Telegraph column that seemed to say Britain would continue to enjoy most of the benefits of EU membership — a claim dismissed by European leaders as wildly unrealistic. That fueled concern among Conservatives who felt Johnson lacks the attention to detail to be a leader.

Gove, a former journalist on the Rupert Murdoch-owned Times newspaper, had long disclaimed any ambition to be Britain’s leader. Asked earlier this month if he would run, he said: “Count me out.”

UK Stock Index Above Pre-Vote Level: Crisis Over? Not Likely

Gove tried to explain the 180-degree turn Thursday, saying the country “needed someone who would be able to build a team, lead and unite.”

“Boris is an amazing and an impressive person, but I’ve realized in the last few days that Boris isn’t capable of building that team and providing that unity,” he said.

The first public signs of a split between Johnson and Gove came in an email from Gove’s wife, newspaper columnist Sarah Vine, obtained by Sky News on Wednesday. It suggested that Gove should ensure he had specific guarantees from Johnson before backing the latter’s bid. Vine added that influential media barons Murdoch and Paul Dacre, editor of the right-wing Daily Mail, “instinctively dislike” Johnson.

Steven Fielding, professor of politics at the University of Nottingham, said Johnson “wasn’t trusted enough by the people who really wield power in British politics — Rupert Murdoch and Paul Dacre.”

The drama was a reminder of the ruthlessness of internal politics in the Conservative Party, which has a history of overturning its leaders. Even its most successful prime minister, Margaret Thatcher, was ousted by her own party in 1990.

Britain’s main opposition Labour Party is also in turmoil, but is finding it harder to change its leadership. Party chief Jeremy Corbyn is under intense pressure to resign after losing a confidence vote among his lawmakers. He says he still has the support of the party rank-and-file and of several influential trade unions.

By Thursday, the situation had reached a stalemate: Corbyn would not resign and no Labour legislator had yet come forward to challenge him.

Conservative lawmakers will choose two finalists before more than 100,000 party members select the winner in a postal ballot. The result will be announced on Sept. 9.

The bookies’ early favorite is 59-year-old May, who is seen by many in the party as a safe pair of hands as the country struggles to disentangle itself from the EU. Her six years as Britain’s interior minister, considered one of the toughest jobs in politics, gives her credibility to deal with the EU on the issue of immigration, sure to be one of the thorniest topics in the exit talks.

This May Be the Week That Finally Breaks the Labour Party

Although May supported remaining in the EU during the referendum campaign, she said she would respect the result of the vote.

“The United Kingdom will leave the EU,” she said, pledging to create a new government department devoted to negotiating Britain’s “sensible and orderly” departure from the bloc.

The new prime minister will also have to deal with an economy weakened by the EU vote. Bank of England Governor Mark Carney said Thursday that the economy had suffered a “large, negative shock.”

“The economic outlook has deteriorated and some monetary policy easing will likely be required over the summer,” he said — but cautioned there was only so much the central bank can do to ease the pain.

What, if any, role Johnson will play in a new government is unclear. Johnson has bounced back before, dismissing gaffes—from suggesting people in Papua New Guinea were cannibals to insulting the entire population of Liverpool—with a shrug or an apology.

His latest move infuriated pro-EU Conservatives including former Cabinet minister Michael Heseltine, who said Johnson had “ripped the party apart. He’s created the greatest constitutional crisis of modern times, he’s knocked billions off the value of the nation’s savings”—and then fled the scene.

“I have never seen so contemptible and irresponsible a situation,” Heseltine told the BBC.

But Johnson remains a member of Parliament, and few would rule out an eventual return to front-line politics by one of Britain’s great political survivors.

“Knowing Boris Johnson, he probably doesn’t think this is the last chance for him,” said Tim Bale, professor of politics at Queen Mary, University of London. “This is Boris! He’s going to leave his colleagues to clear up the mess he himself helped create, and in a few years he might have another crack at it.”