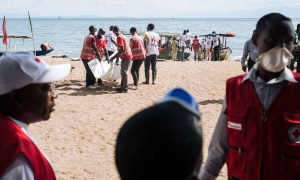 Migrants on a ship intercepted offshore on June 24, 2018, near the town of Gohneima, east of Tripoli, Libya. (Libyan Coast Guard/File Photo via AP)
Africa

Boat With 86 Migrants Capsizes Off Tunisia

CAIRO—The U.N. migration agency says a boat carrying 86 migrants from Libya sank in the Mediterranean overnight, and just four people on board survived, with 82 missing.

Some of the four survivors told the Tunisian coast guard on Thursday, July 4, that the boat had sunk off the town of Zarzis, Red Crescent official Mongi Slim told Reuters.

The shipwreck tragedy happened late on Wednesday, July 3, off the Tunisian city of Zarzis and came a day after a deadly airstrike on a Libyan detention center that killed at least 44 migrants.

Tunisian fishermen came across the sinking boat and were able to pull out the four men, but could not find any of the other passengers on the boat, said Lorena Lando, head of the International Organization for Migration in Tunisia.

One of the four, a man from Ivory Coast, died overnight and the other three remained hospitalized, Slim said, adding that no more information was available.

At least 65 migrants drowned last May when their boat capsized off the Tunisian coast after they had left Libya hoping to reach Europe.

In the past week 65 migrants have drowned and since the Tripoli clashes began, 871 migrants have been returned to detention in often unacceptable conditions l #Humanitarian https://t.co/uFY7T9yxbw

“In the first four months of 2019, 164 people are known to have died on the route, a smaller number but a higher death rate than in previous years, with one dying for every three who reach European shores, the UN refugee agency UNHCR said,” according to Dhaka Tribune.

Reuters and NTD staff contributed to this article.