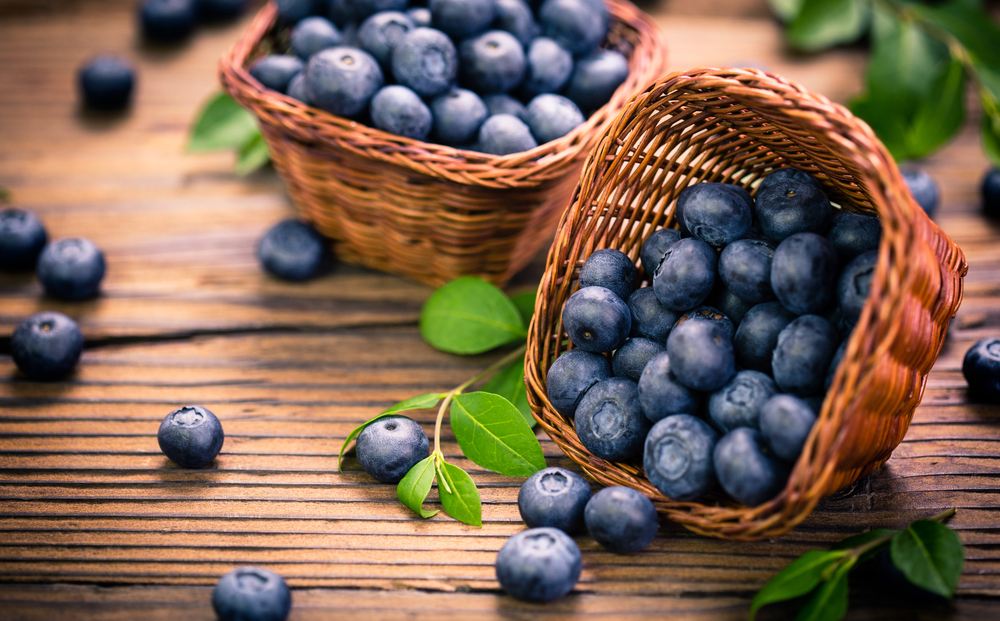 In conclusion, “one portion of blueberries can improve [our] cell[ular] resistance [to] DNA damage, “thus supporting the importance of consuming [healthy plant] foods regularly.” (ShutterStock)
Diabetes

Blueberries for a Diabetic Diet and DNA Repair

A famous pair of Harvard studies, which involve so many people over so long a time they’ve by now chalked up millions of “person-years” of data, found that the consumption of “anthocyanin-rich foods”—foods containing those bright-colored plant pigments—was associated with a lower risk of developing type 2 diabetes over time, “particularly blueberries.” Just two or three servings a week associated with a 23 percent lower risk. In my Daily Dozen, I recommend berries every day.

Why, though? What do berries have to do with diabetes? Well, type 2 diabetes is caused by insulin resistance, and interventional studies evidently “clearly show” that dietary berries can “ameliorate… insulin resistance.” Yeah, but that was in… “diabetic mice.” What about in men and women? Those consuming lots of anthocyanin-rich foods, like berries, didn’t just have less inflammation, but significantly lower insulin resistance. Okay, but by how much? By as much as you would get walking like an hour a day, seven days a week. Wow, how many berries were they eating?

That was for 35mg of anthocyanins a day. So, like a cup of strawberries or cherries, a half a cup of raspberries, just a quarter cup of blackberries, or even just a few spoonfuls of blueberries. But that was just a snapshot-in-time cross-sectional study. What we need are interventional trials, where you give people blueberries in a double-blind, randomized, and placebo-controlled clinical trial to truly put them to the test.

Okay, here you go. So they could fake people out with a placebo, they used powdered blueberries—the equivalent of about two cups of fresh blueberries’-worth in a smoothie—and got a significant improvement in insulin sensitivity.

Two cups is a lot, though. Any benefits for just a typical half-cup serving? This study demonstrated a significant reduction in postprandial oxidation, meaning all the free radicals created when you eat some sugary breakfast, like corn flakes. Here’s the antioxidant capacity of your bloodstream taking a nosedive two hours afterwards, as your body tries to cope. But eat it with a half cup of blueberries, and you start out higher and stay higher after the meal. Note they also tried just adding a quarter cup of blueberries, and that was clearly not enough; so, we should strive for a full serving.

The reason we care about free radicals, though, is that they can damage our DNA. Can a single portion of blueberries really improve protection against DNA damage?: “A single portion of blueberry [can improve] protection against DNA damage”! They drew blood from people before and after they ate some frozen blueberries, and exposed their white blood cells to free radicals in the form of hydrogen peroxide. And, “[b]lueberries significantly reduced [the] DNA damage [done within a single] hour after berry consumption.” “However, the protective effect was transient, and [our DNA vulnerability] returned [within two hours].” So, we want to be eating super-healthy foods like berries at every meal. In conclusion, “one portion of blueberries can improve [our] cell[ular] resistance [to] DNA damage, “thus supporting the importance of consuming [healthy plant] foods regularly.”

This story was originally published on the NutritionFacts.org blog.