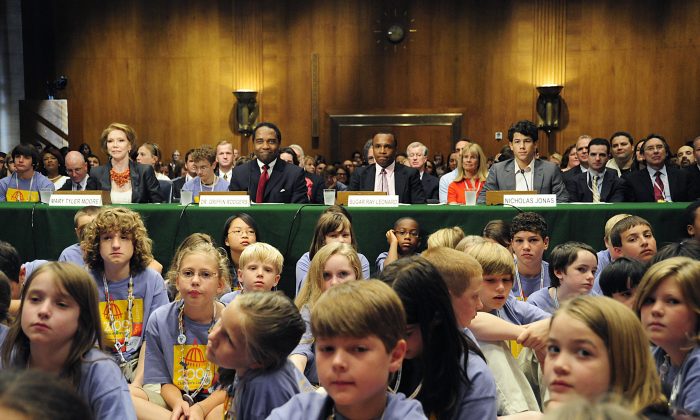 Celebrities and medical leaders sit surrounded by children living with Type 1 diabetes, waiting for a government hearing on Capitol Hill in June 2009. New research shows that for children with Type 1 diabetes, too much blood sugar can lead to slower growth in some areas of the brain. (Karen Bleier/AFP/Getty Images)
Health News

For children with Type 1 diabetes, balance is key. Too little blood sugar can lead to seizures or coma. But new research shows that too much can lead to slower growth in some areas of the brain.

For the study, which is published in the journal Diabetes, researchers tracked brain structure and cognitive function in 144 young children with Type 1 diabetes and a comparison group of 72 children without diabetes over 18 months.

MRI scans showed that the brains of both groups of kids were growing, but growth was slower in several areas of the brain in the children with Type 1 diabetes.

Growth was slowest in children with the highest blood sugar levels and in children whose levels showed the most fluctuation.

“This study shows we need to strike a balance between high blood sugar levels and low sugar levels, and avoid those extremes,” says Eva Tsalikian, a pediatric endocrinologist at University of Iowa Children’s Hospital. “The better we control those levels, the less likely that a child’s brain development will be affected.”

The researchers also tested the children’s brain function with standard tests of IQ, learning and memory, and mood and behavior, but they found no significant differences between the two groups.

From University of Iowa via Futurity.org