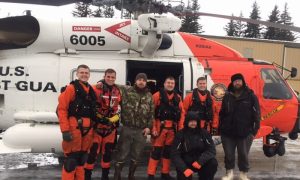 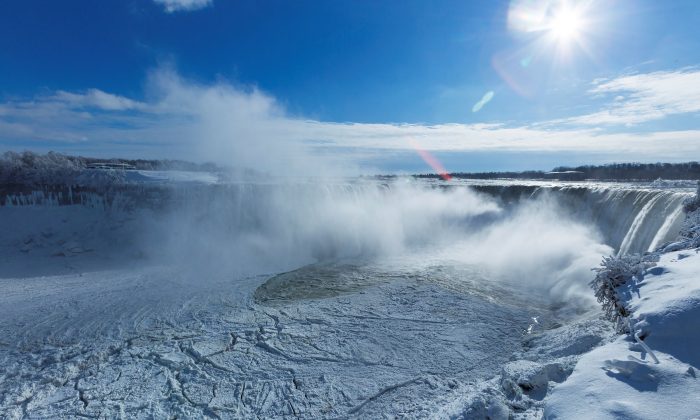 Ice begins to collect at the base of the Horseshoe Falls in Niagara Falls, Ontario, Canada, Jan. 3, 2018. (Reuters/Aaron Lynett)
US News

Blizzard Pounds US Northeast as Snow Sweeps Across South

CHARLESTON, S.C./BOSTON—Heavy snow and high winds pounded the U.S. East Coast along a front stretching from Maine as far south as North Carolina early on Thursday, knocking out power, icing over roadways and closing hundreds of schools.

The storm, the product of a rapid and rare sharp drop in barometric pressure known as bombogenesis that on Wednesday dumped snow on Florida’s capital Tallahassee for the first time in 30 years, was expected to last through the day.

States of emergencies were in effect in Florida, Georgia, North Carolina and Virginia and blizzard warnings from the Canadian border as far south as Virginia.

Much of the eastern United States is in the grip of a sustained cold spell that has frozen part of Niagara Falls, played havoc with public works and impeded firefighting in places where temperatures barely broke 20 degrees Fahrenheit (minus 6 centigrade).

Areas around Boston were forecast to see about one foot (30 cm) of snow on Thursday, and the National Weather Service predicted a similar amount and wind gusts of up to 55 mph (90 kmph) in New York City.

Schools were ordered to close in both cities.

“Both rush hours will be affected,” Boston Mayor Marty Walsh earlier told a news conference. “Be patient. With the amount of snow we’re getting here, we could be plowing your street and a half hour later it could look like we haven’t been there.”

Private forecaster Accuweather said snow would fall quickly during the day, at a rate of several inches per hour, with the storm intensified by the bombogenesis effect.

Also known as a bomb cyclone, the phenomenon occurs when a storm’s barometric pressure drops by 24 millibars in 24 hours.

More than 35,000 customers were without power in Georgia, North Carolina and Virginia early on Thursday, utilities reported online.

A part of US-13 at the Chesapeake Bay Bridge-Tunnel in Virginia was closed due to high winds early on Thursday while state transportation departments throughout the region reported dozens of delays due to deteriorating roads conditions.

Late on Wednesday night, a baggage car and two sleeper cars on an Amtrak train traveling from Miami to New York, with 311 passengers aboard, derailed in as it was slowly backing into a station in Savannah, Georgia. No one was injured, an Amtrak spokesman said.

An Amtrak train derailed in Savannah, GA, this morning where rare snow and ice fell on Wednesday – no injuries were reported. Treacherously snowy, windy weather to spread up the East Coast today : https://t.co/Ebl8905HV0 pic.twitter.com/lZyMmHoJoL

By Harriet McLeod and Scott Malone