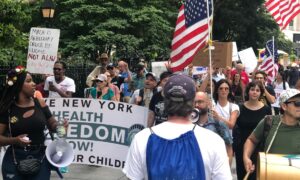 President Joe Biden announced his pick to serve as U.S. Attorney for Manhattan in a statement released on Tuesday.

Damian Williams, 40, would be the first black man to serve in the high-profile position in the Southern District of New York (SDNY).

He is currently serving as Chief of the Securities and Commodities Fraud Task Force at the SDNY, where he has been working since 2012. Part of his role is to supervise over 20 senior prosecutors and represent the district at public events, as well as managing relationships with other enforcement agencies.

Seven other nominees for the top federal law enforcement position in other states and districts were also made public, with two more nominated for New York State positions.

“President Biden is announcing eight new nominees to serve as U.S. Attorneys across the country, officials who will be indispensable to upholding the rule of law as the top federal law enforcement officials for their districts,” the statement reads.

“These individuals were chosen for their devotion to enforcing the law, their professionalism, their experience and credentials in this field, their dedication to pursuing equal justice for all, and their commitment to the independence of the Department of Justice.”

The SDNY includes Manhattan, Bronx, Westchester County, as well as other outlying districts.

The White House announcement further noted that the nominated U.S Attorneys will play an important role in tackling the increase in shootings seen during the last year and a half.

“The President has launched a comprehensive effort to take on the uptick in gun crime that has been taking place for the last 18 months—putting more cops on the beat, supporting community prevention programs, and cracking down on illegal gun trafficking,” the White House briefed.

If passed by the Senate, Williams would succeed Audrey Strauss, who is currently holding the post.

“Damian Williams has tremendous legal acumen, is deeply experienced in the Southern District, has tried significant cases and has a strong commitment to equal justice and civil rights under the law. He is ready to take the helm to steer the Southern District forward into a bright future,” Schumer said in a statement.

Another one of Schumer’s picks, Breon Peace, was also nominated by Biden to be the U.S. attorney for the Eastern District, which includes Staten Island, Queens, Brooklyn, and Long Island. He previously served as Assistant U.S. Attorney in the same district.