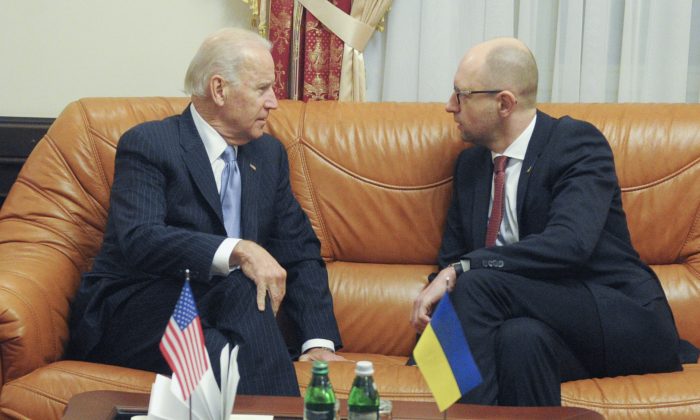 Biden, speaking Monday on a trip to the Ukrainian capital, also emphasized the need for Russia to fully meet its obligations under February’s Minsk agreement that was intended to end the fighting in eastern Ukraine.

“The United States stands firmly with the people of Ukraine in the face of continued—I emphasize, continued—aggression from Russia and Russian-backed separatists,” Biden said after his talks with Ukraine’s President Petro Poroshenko.

Ukraine and the West have accused Russia of backing the rebels in eastern Ukraine with troops and weapons, accusations Moscow has denied.

Fighting between Ukrainian forces and Russia-backed separatists has abated significantly since early September, after killing some 8,000 people since April 2014, but tensions remain high because of unresolved questions about the final political status of the rebel regions in the east.

“Moscow has to fully implement the Minsk agreement and work constructively with Ukraine to create the conditions for free, fair and safe local elections to occur in Donbass,” Biden said, referring to the collective name for the two rebel regions.

After a separate meeting with Ukraine’s Prime Minister Arseniy Yatsenyuk, Biden pledged that Washington will talk to its allies to make sure that Russia pays an increased price if it fails to meet its obligations under the Minsk agreement, but he emphasized that Ukraine has to fulfill its end of the deal.

“The Russians haven’t kept their part of their bargain, but you can’t, and the prime minister knows this, you can’t fail to keep your part, otherwise there are people in Europe (who) will say: ‘well, they’re both the same,'” he said.

Biden also stressed the need for Ukraine to ramp up the fight against corruption and undertake critical reforms.

“It’s absolutely critical for Ukraine in order to be stable and prosperous and part of a secure Europe to definitely, thoroughly, completely root out the cancer of corruption,” he said.