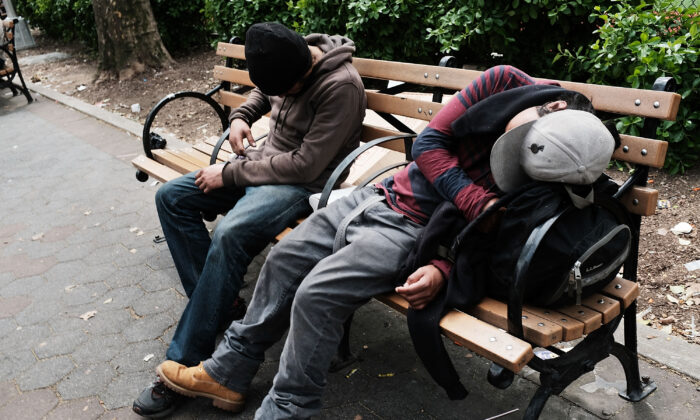 Men sit passed out in a park where heroin users gather to shoot up in the Bronx, New York City, on May 4, 2018. (Spencer Platt/Getty Images)
Executive Branch

The Biden administration will be spending $3.6 million to set up vending machines in rural Kentucky that will distribute drug supplies as part of a project run by the National Institutes of Health (NIH).

“Our kiosk, or KyOSK (KY Outreach Service Kiosk), will be supplied with injection equipment, naloxone, fentanyl test strips, hygiene kits, condoms, and other supplies,” according to the project. The vending machines will allow drug users to procure items like syringes without having to come into contact with health experts.

Earlier this year, the Biden administration had pushed a $30 million harm reduction grant program. A spokesperson from the Department of Health and Human Services had said to the Free Beacon that kits distributed under the initiative would include pipes that will allow users to smoke crystal methamphetamine, crack cocaine, and “any illicit substance.”

In an interview with the media outlet, Sgt. Clyde Boatwright, president of the Maryland Fraternal Order of Police, said more government spending should be aimed at preventing drug abuse rather than making such activities safer.

“If we look at more of a preventive campaign as opposed to an enabling campaign, I think it will offer an opportunity to have safer communities with fewer people who are dependable on these substances,” he said.

Following a public backlash, the White House was forced to pull away from funding the $30 million program. Yet, officials within the Biden administration remain open to similar initiatives.

In July, Dr. Rahul Gupta, director of the office of National Drug Control Policy, expressed support for legalized injection sites where drug users will be allowed to take drugs under the supervision of health experts.

Overdose Deaths and the Drug Crisis

The 2021 Drug Overdose Report issued on June 13 showed that 2,250 citizens from the state overdosed and died from drugs last year, which is a 14.5 percent increase compared to 2020.

“The drug epidemic is not a Kentucky issue or political issue, but a nationwide issue that is affecting everyone and every state,” said Office of Drug Control Policy (ODCP) Executive Director Van Ingram, according to a post by the state government.

“Our focus over this next year will be on increasing access to clinical care for those suffering from an addiction and offering more harm reduction measures.”