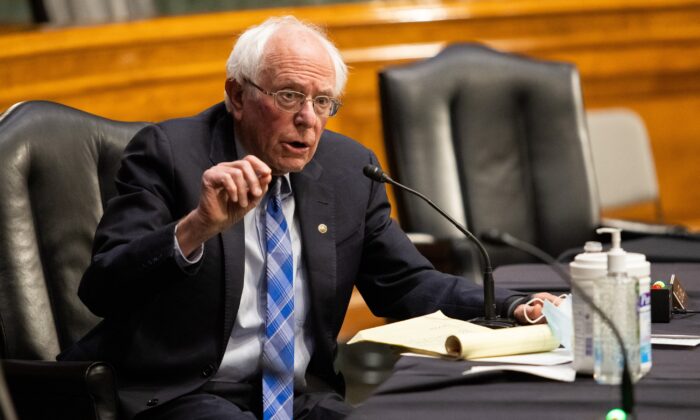 In comments to ABC This Week host Martha Raddatz on July 17, Sen. Bernie Sanders (I-Vt.) said that President Joe Biden should not have rewarded a brutal dictatorship like Saudi Arabia with a visit.

In reply to Raddatz’s question whether the visit to Saudi Arabia should have been made, Sanders said,  “No, I don’t think so.”

Sanders pointed to an incident that happened back in 2018 saying, “You have a leader of that country who was involved in the murder of a Washington Post journalist.”

The crown prince has been accused of orchestrating the murder of Saudi Arabia journalist Jamal Khashoggi in 2018, after Khashoggi, a columnist for the Washington Post, went into a Saudi embassy in Turkey.

“I don’t think that that type of government should be rewarded with a visit by the president of the United States,” he added.

“Look, you got a family that is worth $100 billion, which questions democracy, which treats women as third-class citizens, which murderers and imprisons its opponents,” he said of the Saudi royal family, Reuters reported.

Thus, it is not necessary for America to cozy up with such a country, Sanders pointed out.

Sanders further disputed the Biden administration’s intent of reaching out to the OPEC countries for oil.

Instead, he urged the U.S. president to push the oil companies to cease swindling domestic consumers.

“I happen to believe that we’ve got to tell the oil companies to stop ripping off the American people and if they don’t, we should impose a windfall profits tax on them,” he said.

Sanders expressed his concern about the looming recession that the United States could face, but noted that the billionaires had seen their wealth increase by $2 trillion throughout the pandemic.

“If you’re looking at the outrageously high cost of gas at the pumps right now, one of the things we’ve got to look at is the fact that while Americans are now paying $4.50, $4.80 for a gallon of gas, the oil company profits in the last quarter have been extraordinarily high,” he said.

Further Disdain for the Saudi Visit

Biden has invoked opposition for meeting bin Salaman from Khashoggi’s widow and from human rights groups and journalism organizations despite the president defending the encounter.

“President Biden once vowed to make Saudi Arabia a pariah and even released U.S. intelligence reports that pinned Saudi Crown Prince Mohammed bin Salman for ordering the killing of Washington Post Columnist Jamal Khashoggi,” Jon Schleuss, president of the NewsGuild, said in a statement. “Yet today he met with Saudi leaders and avoided answering questions from reporters asking if he planned to condemn Khashoggi’s killing.”

Biden told reporters after the meeting, which also involved other Saudi officials, that he raised the murder of Khashoggi at the top of the meeting.

Yet, Sherif Mansour, a program coordinator for the Committee to Protect Journalists called Biden’s statement “empty talk,” and criticized his failure to hold the Saudi prince to account.