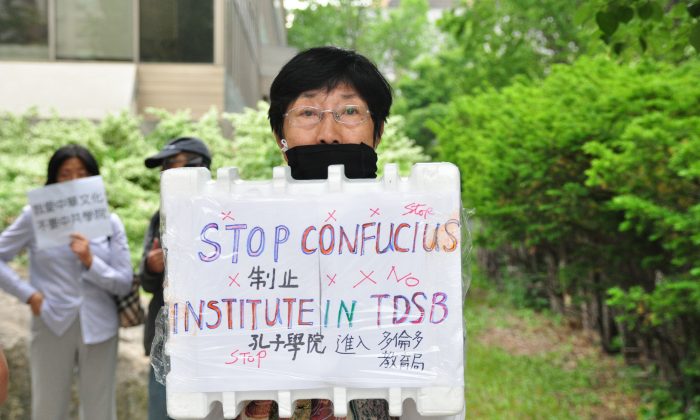 Beijing Weighs in on Row over TDSB/Confucius Institute Partnership

The Chinese state agency in charge of the controversial Confucius Institutes is urging Canada’s largest school board not to suspend its ties with the institutes, which have been cited by intelligence agencies as instruments for the Chinese regime to extend its “soft power.”

“Recently we learned from media that TDSB is going to hold a meeting to vote on the motion of suspending the Confucius Institute in Toronto,” reads the letter, issued in both English and Chinese.

The letter asks Quan and the trustees to view the issue on international relationship level, beyond just education.

“We hope Director Donna Quan and the trustees would proceed (sic) the situation from the perspectives of the friendship between China and Canada as well as the educational cooperation of the two countries, act with integrity and mutual respect, to support TDSB to honor and implement the agreement between us on the establishment of the Confucius Institute,” the letter says.

The Toronto Confucius Institute (CI) was inaugurated in May, and was set to begin our rollout of programs in schools this fall. However, after an outcry from concerned parents and human rights activists protesting Chinese regime’s influence in the education system, a TDSB committee on June 11 voted to suspend the partnership with the CI pending further information.

The issue will be discussed again at a board meeting on June 18, at which time the trustees will vote on whether to sustain the suspension.

The TDSB’s partnership with CI was spearheaded by former chair Chris Bolton who resigned suddenly on June 13, five months before the end of his term. His resignation came two days after the committee’s vote to suspend the CI.

Bolton, who has faced a number of controversies recently involving a charity he used to run, said in a statement that his resignation was due to personal reasons. He did not return requests for an interview.

At least one trustee also received a letter from Ping Tan, founder of the National Congress of Chinese Canadians (NCCC), expressing support for the Toronto CI.

Epoch Times has reported that, according to Chen Yonglin, a high-profile Chinese defector who sought asylum in Australia, the NCCC is at the top of a pyramid of groups set up by the Chinese Embassy and consulates in Canada to control and influence the Chinese community and the Canadian government.

“Organizations like the National Congress were founded based on issues that Chinese Canadians care about, and using the name of unity,” Chen said. “But the real purpose was to further the interests of the Chinese regime in Canada and to lobby the Canadian government.”

The NCCC has also held events in Canada to oppose the spiritual discipline Falun Gong, which is heavily persecuted by the Chinese regime, as well as events in support of the Chinese Communist Party’s (CCP) control in Tibet.

The NCCC has denied claims by Chen and says it is “absolutely is not controlled by any party or political force.”

Trustees who voted to suspend the Toronto CI cited a lack of information about the partnership and concerns they heard from parents.

“Most of the board members—we hadn’t really scrutinized (the CI),” Howard Goodman, trustee for Eglinton-Lawrence, told Epoch Times in an earlier interview.

With statements from the Canadian Association of University Teachers saying CIs are “political arms” of the Chinese government and should have no place on Canadian campuses, and recent news of universities cancelling or rejecting offers of partnership with the institute, Goodman said more information is needed before the program is initiated in Toronto schools.

Many parts of the agreement between the TDSB and CI have been kept confidential, even from the trustees.

Mike Lewis, a Toronto parent who launched a campaign to stop the CI, says having the Institute in the TDSB is unacceptable as it opens the door for the Chinese regime to influence the education system for children.

“Having the Chinese Communist Party influencing our children is absolutely unacceptable and we will persist until our ties with them are cut,” says Lewis.

This week the American Association of University Professors issued a statement joining their Canadian counterpart, CAUT, in asking universities to not bring CIs on board.

The Confucius Institute of Toronto did not respond to requests for an interview.