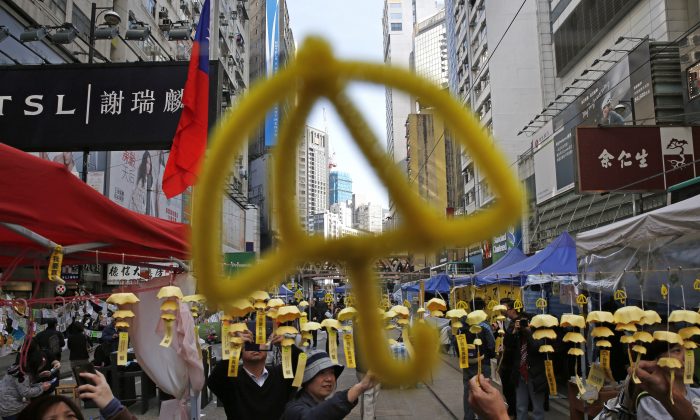 Yellow umbrella decorations are hanged by protesters in the Causeway Bay shopping district, one of the occupied areas by pro-democracy protesters in Hong Kong Saturday, Dec. 13, 2014. (AP Photo/Kin Cheung)
China

Hong Kong police are set to clear out the last Umbrella Movement encampment on Monday, but protesters are not folding just yet.

The clearing of the Causeway Bay protest site, the third and tiniest of three occupied areas, will end a nearly three-month long, student-led civil disobedience movement.

This past week, police dismantled the main protest site in Admiralty, the city’s financial and government district, and arrested 249 student protesters, supporters, and pan-democratic lawmakers for unlawful assembly.

Alex Chow, a prominent student leader from Hong Kong Federation of Students, and a number of others were later released from police custody without charge.

Another large protest site in Mong Kok was demolished on Nov. 24 and 25. Student leaders Joshua Wong and Lester Shum were arrested and charged with contempt of court. Both were later let out on bail.

Because of Causeway Bay’s size and small protester count — the site draws about 50 protesters each night as the protests wore on — its impending clearance is far less symbolic than the shut down of the orderly Admiralty “tent city,” or the boisterous Mong Kok barricades. But police action on Monday will effectively end the occupation phase of the Umbrella Movement.

Student leaders are confident of a return to the streets, however, and have vowed to switch up their strategy.

Joshua Wong, who featured on the cover of Time magazine at the start of the protests, told the press: “If there are… civil disobedience campaigns in the future, we won’t drag them on but will use flexible strategies.”

Wong added that they may hold more protests when the Hong Kong government starts a second round of consultation on political reform.

In the meantime, Umbrella protesters are not standing still.

The Mong Kok crowd began to “Gau Wu,” the Chinese Cantonese dialect phrase for “shop,” after their barricades were torn down, and have been keeping at it nightly.

Protesters would throng the sidewalks in Mong Kok on the pretext of “shopping” as per the instructions of Hong Kong’s top leader Leung Chun-ying. When significant police forces arrive, they would move on to another street. On one occassion, the demonstrators even led the police on a wild-goose chase between Mong Kok and Tsim Sha Tsui.

In response to the protester-coined “Shopping Revolution,” police temporarily cordon off streets, check the identification of Mong Kok passers-by, and have made dozens of arrests.

On Friday and Saturday, a group of “carolers” dressed in church robes visited the “orphaned” protest area to spread the “Shopping Revolution” spirit.

Carrying yellow umbrellas and crosses with the iconic “I want true universal suffrage” banners tacked on, these “carolers” sang Christmas carols with lyrics modified to mock the Hong Kong police and government, as well as promote democracy.

Citing bible on Ah Lung: what is heaven? it is where cripples could walk, voiceless could voice out…#OccupyHK pic.twitter.com/PNXRnmNiUS

Embattled Chief Executive Leung Chun-ying and the Chinese communist regime might have suppressed the Umbrella Movement with the clearing of protest sites, but they have yet to fully stifle the voices calling for democracy.

According to Hong Kong publication Ming Pao, the banners were subsequently removed after 11:00 a.m. following a complaint by the Agriculture, Fisheries, and Conservation Department.

This incident echos an earlier one in October, when a group of mountaineers scaled Lion Rock hill to hang a huge “I want true universal suffrage banner” to show their support for the pro-democracy demonstrations.

Protesters are demanding fully democratic elections for the 2017 Hong Kong Chief Executive elections and for the Beijing-backed Leung to resign.

Leung and the Chinese regime appear to have “won” the fight against the protesters, but it remains to be seen how an on-going Chinese Communist Party (CCP) intrigue that instigated the Hong Kong protests will be resolved.

Two factions of the CCP, one headed by current Party leader Xi Jinping and the other backing former leader Jiang Zemin, are presently embroiled in a power struggle.

As Epoch Times earlier reported, Jiang’s faction wanted to displace Xi even before he took office. Zhang Dejiang, the chairman of the Standing Committee of the National People’s Congress (NPCSC), and others stirred unrest in Hong Kong to create trouble for Xi, who is clamping down on Jiang supporters via his anti-corruption campaign.

It was Zhang who made the faithful Aug. 31 decision that Hongkongers can elect their chief executive with universal suffrage as long as the candidates are picked by a pro-Beijing nominating committee. The NPC decision greatly angered Hongkongers and sparked a chain of events leading to Umbrella Movement and the occupation of Hong Kong’s streets on Sept. 28.

Xi never brought up the NPC’s Hong Kong reform package since it was announced. Also, at the recent APEC meeting in China, Xi told Leung, a suspected underground communist member and Jiang supporter, that an accurate and comprehensive understanding of the “One Country, Two Systems” principle and Hong Kong’s Basic Law is required to support the development of democracy in Hong Kong.