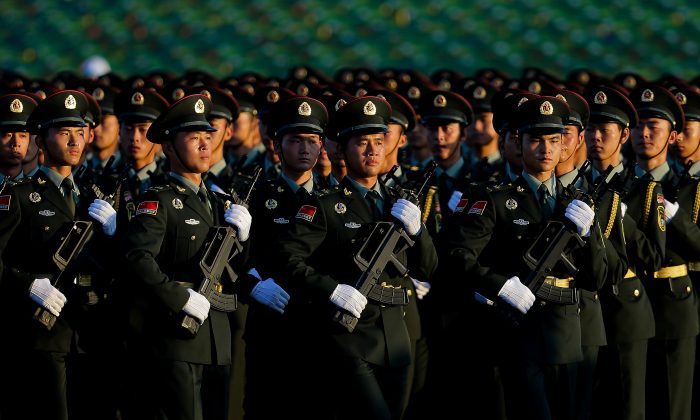 Chinese People's Liberation Army troops practice marching as they arrive at Tiananmen Gate for a military parade to commemorate the 70th anniversary of the end of the World War II in Beijing Thursday Sept. 3, 2015. (AP Photo/Andy Wong)
China

In the dead of the night, a military airstrip in eastern China is attacked. In an unlit war room, a fist slams down resolutely upon the table.

The clip, titled “Island Battle,” was made to commemorate China’s World War II victory against Japan, and is one of several short videos featuring military hardware and martial intent produced in the lead-up to the People’s Liberation Army’s grand military parade on Sept. 3.

But while English-language propaganda channels in China preach pacifism (Xinhua, the state news agency, ran an article with the headline “China’s V-Day parade to demonstrate mankind’s common aspiration for peace”) the intent of the video seemed more threatening.

“The target is the United States, isn’t it? I saw F22 and the Patriot missiles.”
— Chinese netizen

It seemed an ominous way to celebrate the upcoming military parade, in which 12,000 troops and 500 pieces of the latest weaponry will march through Tiananmen Square in Beijing under the giant portrait of Chairman Mao Zedong, as well as Chinese leader Xi Jinping, top Communist Party officials, and the heads of states from 30 countries. Nearly 200 aircraft will fly overhead.

The Chinese regime has taken extreme measures to ensure the parade’s success. According to CNN, central Beijing is a “ghost town”—hundreds of factories were closed and vehicles banned to turn Beijing’s smoggy skies a stunning “parade blue”; pigeons were banned and macaques were sent to destroy birds’ nests; those living in the parade area can’t leave their homes, open windows, or go onto their balconies.

The Communist Party’s World War II victory celebrations have been slammed by commentators and Chinese citizens alike as an act of hubris. Historians agree that the Nationalist Party did the bulk of the fighting while the communists committed their troops to sabotaging the Nationalists, and even collaborated with the Japanese.

In 1949, four years after the conclusion of the war, the communists defeated the Nationalist armies to seize control of China and establish the People’s Republic.

Analysts also said that the massive Sept. 3 parade is Xi Jinping’s way of making a statement of intent to the world—neighboring countries and the United States should look upon China’s military might, and be warned.

But, like the video, he also hinted at menace.

“China is self-reliant and it has an independent military capability to develop on its own. It’s openly showing that it’s not a hidden thing,” Kuhn told Xinhua. The parade is “in a sense a celebration of China’s emergence in the world in a very strong way.”

Chinese citizens, who have been bombarded with fictionalized World War II television dramas that demonize the Japanese, are being urged to watch films that depict the Red Army’s heroic exploits during the war by local propaganda departments.

Before the credits roll in the five-minute military video “Island Battle,” two lines flash across the screen: “A powerful nation can be destroyed if it is warmongering. During peace, a country who forgets to fight is in danger,” the Chinese characters read. “We love peace with a passion, but will prepare for future war.”

In one scene during the video, an enemy aircraft carrier group makes a futile defense against an incoming rain of Chinese intercontinental ballistic missiles. The warheads explode and destroy ship after ship. (The only country with an aircraft carrier battle group in the Pacific is the United States.)

By dawn, the combined might of China’s army rumbles through the decimated enemy island base, and the Communist Party flag is raised at a tower.

“The target is the United States, isn’t it? I saw F22 and the Patriot missiles,” read one netizen’s comment in response.