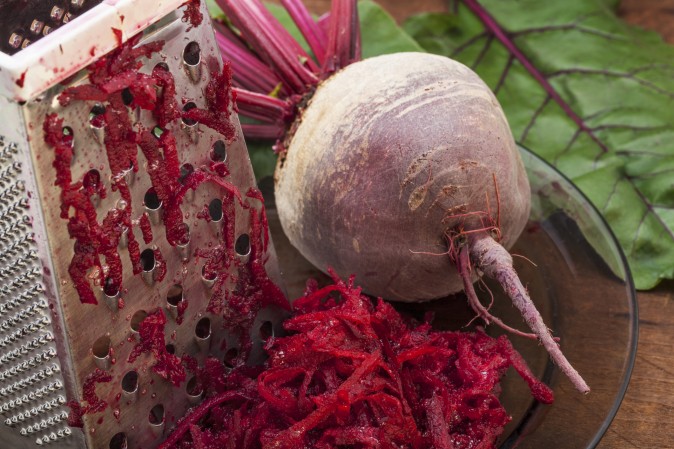 Mix grated beet and ground turkey for a delicious burger that is good for your blood. (marekuliasz/photos.com)
Health

Why would I want to eat beets? Because my mother happened to like beets and said they were good for me. You did not say “no” to my mother. Besides, I thought they might be better than spinach.

Now it appears my mother made an excellent choice, as research shows the lowly beet packs a powerful punch.

Beets are a traditional vegetable in Eastern and Central Europe and India. Fortunately, beets are easily grown most of the year, have long storability, and adapt to a wide variety of climates.

The medicinal and romantic value of beets dates back to early times. Hippocrates, the Father of Medicine, recommended beets for binding wounds, blood cleansing, and digestive problems. The Greek goddess of love, Aphrodite, believed her romantic power was due to beets. Beets are also pictured on the brothel walls of ancient Rome.

Dr. Amrita Ahluwalia, professor of vascular pharmacology at England’s London School of Medicine, is author of a unique study. He reports in the U.S. Journal Hypertension that those who drank beet juice showed a decrease in blood pressure within 24 hours.

Equally interesting, a previous study reported that people who drank a pint of beet juice showed a decrease in blood pressure even when their blood pressure was normal.

So what’s the secret ingredient in beets that lowers blood pressure? For years we’ve known that nitrate decreases hypertension. Ahluwalia says that beets are high in inorganic nitrate which, when eaten, is changed into the gas nitric oxide. Nitric oxide causes blood vessels to relax, resulting in lowered blood pressure.

Another study, reported in the Journal of Applied Psychology, involved men aged 19 to 38 who drank a big glass of beet juice daily for six days before exercise tests such as bicycling. Researchers at the University of Exeter in England proved that drinking beet juice boosts stamina and helps people exercise up to 16 percent longer. In fact, the study suggests that the effect is greater than that achieved by regular exercise.

Professor Andy Jones, an advisor to England’s top athletes, says, “We were amazed by the effects of beetroot juice on oxygen uptake because these effects cannot be achieved by any other known means, including training.”

This “bad fat” undergoes oxidation in the stomach, where it is transformed into potentially toxic compounds and absorbed into the body, he adds. It is linked to cancer and heart disease.

Duthie’s research shows that a combination of turkey and beets, which contain antioxidant compounds, stops the oxidation of bad fats. Besides, he says, this combination tastes good and looks like a normal burger. So far no one has produced a commercial beet burger.

But now a small U.S. company has developed Superbeets, concentrated organic beet crystals that pack a powerful punch. Just one teaspoon of this concentrate mixed with four ounces of water gives you the nitric oxide power of three beets for a fraction of the cost.

For instance, millions of people suffer from arthritis. Superbeets provide the nitric oxide to improve circulation and decrease nerve irritation and inflammation in joints. More nitric oxide also aids asthma patients as it calms the immune system and relaxes airways.

It has also been shown that levels of nitric oxide are significantly lower in depressed people. And since erectile dysfunction is due to inadequate circulation, increased amounts of nitric oxide can solve this common problem.

For further information, see the website www.superbeets.com or call the toll free number 1-800-665-2841