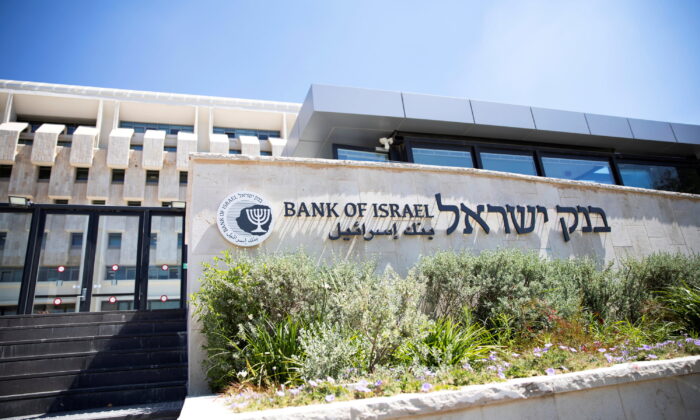 The Bank of Israel building is seen in Jerusalem, Israel, on June 16, 2020. (Ronen Zvulun/Reuters)
Economic Policies

JERUSALEM—The Bank of Israel raised its benchmark interest rate on Monday by three-quarters of a percentage point, its biggest hike in two decades, and appeared on track for further increases as it tries to rein in inflation that has topped 5 percent.

The central bank lifted its key rate to 2.0 percent from 1.25 percent, continuing a tightening cycle that began in April when policymakers first raised the rate from 0.1 percent, an all-time low set at the outset of the COVID-19 pandemic.

The likelihood of a 75-basis-point hike increased last week when data showed Israel’s economy grew a robust 6.8 percent in the second quarter, while the annual inflation rate jumped to 5.2 percent in July, its highest level since October 2008.

The central bank’s policymakers say they are determined to get inflation back within the government’s 1–3 percent annual target.

The last time the Bank of Israel moved by three-quarters of a point was a rate reduction in early 2009. It last hiked rates by at least that amount in mid-2002.

“The Israeli economy is recording strong growth, accompanied by a tight labor market and an increase in the inflation environment,” the Bank of Israel said in a statement. “The (monetary policy) committee has therefore decided to continue the process of increasing the interest rate.”

The bank’s own economists have said they expect the key rate to peak at 2.75 percent in the second quarter of 2023. One more decision is scheduled—on Oct. 3—before a Nov. 1 general election.

Inflation in Israel is still far below Western levels, but with prices rising rapidly and anger growing among Israelis, the cost of living has become a main issue for candidates in the run-up to the election.

“We expect another increase of half a percentage point on Oct. 3, which will also be impacted by central bank decisions in the United States and euro zone to keep raising interest rates significantly in September,” said Ofer Klein, head of economics and research at Harel Insurance and Finance.

Israel’s Manufacturers’ Association, though, called on the central bank to halt rate increases in the coming months to examine the effects of prior hikes on credit consumption in the economy.

The shekel was largely flat against at 3.28 per dollar after the rates decision.

By Ari Rabinovitch and Steven Scheer