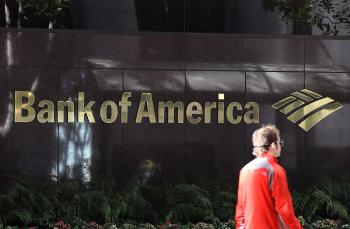 A pedestrian walks by a Bank of America branch office on January 21, 2011 in San Francisco, California. During 2010, U.S. banks increased their lending, although most of the credit was extended to large- and medium-sized businesses. (Justin Sullivan/Getty Images)
Business & Economy

Frank Yu
View profile
Follow
biggersmaller
Print
NEW YORK—Bank of America Corp. (BAC) on Wednesday agreed to settle for $8.5 billion to rest demands from investors that the bank buy back soured residential mortgages made by Countrywide Financial Corp., the subprime lender which Bank of America bought prior to the financial crisis.

The whopping sum is the biggest settlement on record related to the subprime mortgage crisis, and resolves around 530 residential mortgage-backed securities marketed and sold by Countrywide, amounting to total principal amount of more than $424 billion.

With the settlement of $8.5 billion, and an additional $5.5 billion BAC plans to set aside to fund additional liabilities, the Charlotte, N.C.-based bank claims that nearly all of its issues related to legacy subprime mortgages sold by Countrywide would be resolved. While the settlement is massive, it is nonetheless a comforting development for investors, who previously had trouble valuing BAC’s shares with such a potential liability looming over the bank.

In a conference call with analysts on Wednesday morning, BAC CEO Brian T. Moynihan said that the $5.5 billion set aside would cover an additional $500 billion in original principal tied to subprime mortgages sold to investors.

“This is another important step we are taking in the interest of our shareholders to minimize the impact of future economic uncertainty and put legacy issues behind us,” announced BAC CEO Brian T. Moynihan in a statement.

That is an opposite stance from the one the bank took merely months earlier, while on a conference call late last year, Moynihan told analysts that his firm would “fight for it,” according to a call transcript.

The action will dent BAC’s second quarter earnings. In addition to the $8.5 billion and the $5.5 set aside to cover residential mortgage related expenses, the bank is also expected to record $6.4 billion in other mortgage-related write downs and losses, including litigation and foreclosure costs and write down of goodwill.

In total, the bank said that it expects second quarter losses to amount to between $8.6 billion and $9.1 billion, or 88 cents to 93 cents per common share.

This isn’t the first settlement BAC had reached regarding its Countrywide purchase. Last year, it paid more than $108 million to settle claims that Countrywide extracted too much mortgage fees from homeowners. Three years ago, BAC paid close to $150 million to settle with multiple U.S. states over Countrywide’s lending practices.

Analysts at Nomura Securities USA, in a note to clients, wrote that BAC’s settlement could set a precedent for other large players in the subprime mortgage space, namely Wells Fargo Co. and First Horizon.

Wednesday’s announcement was a boon to BAC shares, which had been down 17 percent year-to-date. BAC is the largest U.S. banking firm by assets, followed by JPMorgan Chase & Co., and Citigroup Inc.