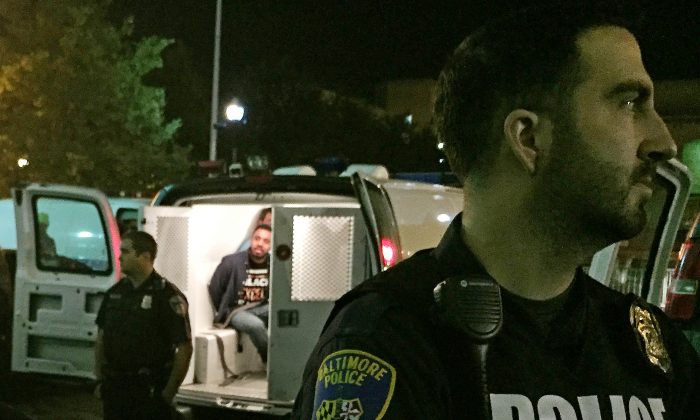 BALTIMORE—Young, black residents of Baltimore hoped a public act of civil disobedience in the heart of local government would force their troubled city to deal with the decades-old problems of police misconduct, housing inequality, and systemic disenfranchisement.

All they got from their overnight sit-in at City Hall were arrests and trespassing charges.

Many on Thursday said they were frustrated and felt increasingly marginalized and under siege.

“The politicians, they failed us today,” said Kwame Rose, a 21-year-old activist who was one of the protest’s organizers.

More than 30 activists disrupted a meeting Wednesday night where city officials were recommending the permanent hiring of interim Police Commissioner Kevin Davis. They demanded a voice in the process. Since the death of Freddie Gray, a 25-year-old black man who suffered a critical spinal injury in police custody, the police department and its leaders have taken the brunt of criticism for decades of government failures to address the city’s woes.

Davis was appointed interim chief when his predecessor, Anthony Batts, was fired in the wake of violence after Gray’s death and a sharp spike in homicides.

Baltimore is a city with roughly 17,000 vacant homes concentrated in its poorest neighborhoods.

Baltimore is a city with roughly 17,000 vacant homes concentrated in its poorest neighborhoods. Its public schools are underfunded and underperforming, and its unemployment rate is far above the national average. Over the years, recreation centers for young people have shuttered, and job opportunities for those living in de facto segregated communities have remained scarce.

The protesters gathered in the balcony of the council chambers chanted, “All night, all day, we will fight for Freddie Gray!” They refused to leave, insisting Davis meet with them and consent to a list of demands that included reducing the use of armored vehicles and riot gear during protests. They also called on Democratic Mayor Stephanie Rawlings-Blake to fire the housing commissioner, whose department was recently sued over allegations that maintenance workers routinely sexually abuse women residents of a public housing complex.

But their main concern was their lack of input in the police chief decision as the department faces a federal probe into allegations of excessive force, and remains at the center of the debate over how poor, black men are treated by the officers and public officials tasked with protecting them.

Davis tried to defuse the situation.

“I’d like to propose this to you, because we can accomplish a lot more at a table where we can all fit,” he said.

“You have our demands, you let all your supporters speak,” someone in the balcony yelled back.

“I will be more than happy to meet with your entire group,” Davis said.

“Now! This is the space where we can talk,” someone yelled back.

Yet even with the protest ongoing, he continued to strike a conciliatory tone, telling The Associated Press that civil disobedience was “part of the healing process.”

“It’s just part of where the city is right now,” he said, as chants of “No justice, no peace,” echoed through the chambers. “I understand where they are, I understand their frustration. But civil disobedience occurs at critical times, and the city’s in a critical time right now.”

Police kept the demonstrators sequestered in the balcony, and the protest dragged on for eight hours into Thursday morning, when some activists left after being threatened with arrest and the last 16 were escorted out in plastic handcuffs about 4 a.m. Police said those arrested ranged in age from 16 to 38, and included three juveniles.

“All we are doing is peacefully demonstrating. We were disrespected by Kevin Davis. He didn’t take us seriously,” said Kevin Wellons, 19, who left the sit-in around 3:30 a.m. with several others.

Speaking Thursday on “The Norris and Davis Show” on WJZ-FM, Davis said the arrests were “the last thing we wanted to do.” He says that, “in a perfect world, they probably wouldn’t have stayed that long.”

Three of the committee’s five members voted Wednesday to recommend Davis for the permanent post. His appointment must still be confirmed by the City Council at a vote scheduled for Monday.

Addressing the committee Wednesday, Davis said he remained committed to training officers to actively engage and interact with community members, and he emphasized his commitment to “respect and fight for the right for Americans to assemble and peacefully protest.”

Rawlings-Blake, who recently announced she would not seek re-election, did not attend Wednesday’s hearing. She came under fire from both residents and Maryland’s Republican governor, who complained she disappeared from public view for hours during rioting on the day of Gray’s funeral.

She said Thursday that she was confused about the purpose of the demonstration.

“They requested a meeting and the commissioner made it very clear that he would meet with them—so clear that he gave them his cellphone number so they could arrange it. And instead of using that as an opportunity for communication, they tweeted his phone number to the world. So, I’m not clear on their goals,” Rawlings-Blake said.