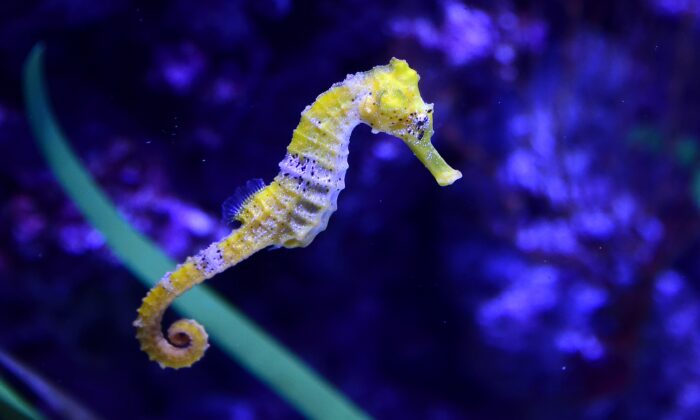 The seahorse recovery program is now in year two and has seen over 200 seahorses released into Sydney Harbour. (Frederic J. Brown/AFP via Getty Images)
Australia

Over 140 baby White’s seahorses, also known as Sydney seahorses, were recently released into the wild across the city’s harbours in a seahorse recovery project.

Following a dramatic decline in Sydney Harbour’s seahorse numbers over the past decade, the project aims to increase the population of the hippocampi through a breeding program at the Sydney Aquarium. The baby seahorses will then be released back into the wild so that they can breed and flourish.

It is hoped the venture will also allow for the marine species to be removed from the New South Wales endangered species list.

Curator at Sydney Aquarium Laura Simmons said that the release on Sep. 9 was a major milestone.

“We’re now in year two of a multi-year project that aims to recover the Endangered White’s seahorse,” Simmons said in a media release.

“I’m extremely proud that today we saw over 140 tagged White’s seahorses released into the wild, where we hope they’ll go on to breed all around Sydney Harbour and the East Coast of Australia to help White’s seahorse flourish.”

White’s Seahorse is named after John White, a surgeon in the First Fleet, which brought the first stages of European settlement to Australia. They are medium-sized seahorses and are one of four specifies known to occur in New South Wales waters.

Their colours are unpredictable as it changes depending on their mood and habitat and despite having propelling fins, they are also known to be one of the slowest swimming fishes in the ocean.

David Harasti, a senior marine scientist with NSW Department of Primary Industries (DPI) Fisheries, said the project was providing hope for the species in Sydney harbour.

“Just last year, the White’s seahorse was listed as an Endangered species in NSW, and this captive breeding program is providing hope for this iconic and mythical marine species and will hopefully contribute to their numbers increasing in the wild,” Harasti said.

It will also involve the restoration of meadows of the seagrass Posidonia Australis in Sydney Harbour, which have been decreasing in size and are critical to the seahorses as habitat.

It is a collaborative effort between Sydney Aquarium, DPI Fisheries, Ocean Youth, the Gamay Rangers, the University of Technology Sydney (UTS), the Sydney Institute of Marine Science(SIMS), and Taylors Wines.