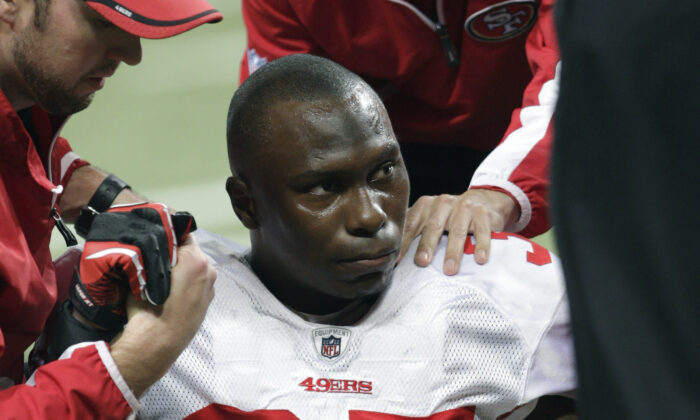 San Francisco 49ers cornerback Phillip Adams (35) is attended to after injuring his left leg during the third quarter of an NFL football game against the St. Louis Rams in St. Louis on Dec. 26, 2010. (Tom Gannam/AP Photo)
Crime and Incidents

The degenerative disease known as CTE is linked to head trauma and concussions that has been shown to cause a range of symptoms, including violent mood swings and memory loss.

“There were inklings that he was developing clear behavioral and cognitive issues,” McKee said. “I don’t think he snapped. It appeared to be a cumulative progressive impairment. He was getting increasingly paranoid, he was having increasing difficulties with his memory, and he was very likely having more and more impulsive behaviors. … It may not have been recognized, but I doubt that this was entirely out of the blue.”

McKee, who directs the CTE Center at Boston University, said that of 24 NFL players diagnosed with the disease after dying in their 20s and 30s, most had stage 2, like Adams. The disease has four stages, with stage 4 being the most severe and usually associated with dementia.

But Adams’s CTE diagnosis was different from the other young players because it was “unusually severe” in both frontal lobes, she said.

McKee compared Adams’s brain to that of Aaron Hernandez, the former football star also posthumously diagnosed with CTE after he hanged himself in prison at the age of 27 while serving a life sentence for a 2013 murder.

Theoretically, a combination of the abnormalities caused by frontal lobe damage could lower someone’s threshold for homicidal acts, McKee said. Still, she said it’s difficult to attribute homicidal behavior to CTE alone because “it’s a complicated issue with many other factors.”

The Lesslie family said they appreciated the diagnosis.

“Even in the midst of crushing heartbreak, we are finding some comfort in the CTE results and the explanation they provide for the irrational behaviors pertaining to this tragedy,” their family statement said.

The Adams family said they were not surprised that he had the disease, but were shocked to learn how severe his condition was.

“After going through medical records from his football career, we do know that he was desperately seeking help from the NFL but was denied all claims due to his inability to remember things and to handle seemingly simple tasks, such as traveling hours away to see doctors and going through extensive evaluations,” their statement said.

Adams’s agent previously told The Associated Press that Adams did not participate in the array of physical and mental health programs that are available to ex-players through the NFL and its players’ union.

The NFL and Adams’s agent did not immediately respond to requests for comment.

CTE, which can only be diagnosed through an autopsy, has been found in former members of the military, football players, boxers, and others who have been subjected to repeated head trauma. One recent study found signs of the debilitating disease in 110 of 111 NFL players whose brains were inspected.

Adams, 32, played in 78 NFL games for six teams over six seasons. He joined the San Francisco 49ers in 2010 as a seventh-round draft pick out of South Carolina State, and though he rarely started, he went on to play for New England, Seattle, Oakland, and the New York Jets before finishing his career with the Atlanta Falcons in 2015.

As a rookie, Adams suffered a severe ankle injury and never played for the 49ers again. Later, with the Raiders, he had two concussions over three games in 2012. Because he didn’t retire by 2014, he wouldn’t have been eligible for testing as part of a broad settlement between the league and former players over long-lasting concussion-related injuries.

The Adams family told investigators that he complained of excruciating pain from his injuries and had memory issues and difficulty sleeping, said York County Coroner Sabrina Gast at a Tuesday news conference.

Adams’s sister told USA Today after the killings that her brother’s “mental health degraded fast and terribly bad” in recent years and that the family noticed “extremely concerning” signs of mental illness, including an escalating temper and personal hygiene neglect.

Gast said pathologists also found amphetamines, for which Adams had a prescription, and the unregulated drug kratom in Adams’s system at time of death.

Investigators later found multiple guns, ammunition, and “numerous notebooks … with cryptic writing with different designs and emblems” among Adams’s belongings, according to affidavits.

York County Sheriff Kevin Tolson said police would likely wrap up their investigation after examining the writing, which he termed “incoherent.” But he emphasized that Adams’s CTE diagnosis and the other findings so far may not provide a conclusive explanation behind Adams’s alleged acts of violence.

“Sometimes we get to know the why, sometimes we don’t,” Tolson said. “There’s one individual that knows the why and he’s deceased. We may not know in this life, on this planet what the why is.”