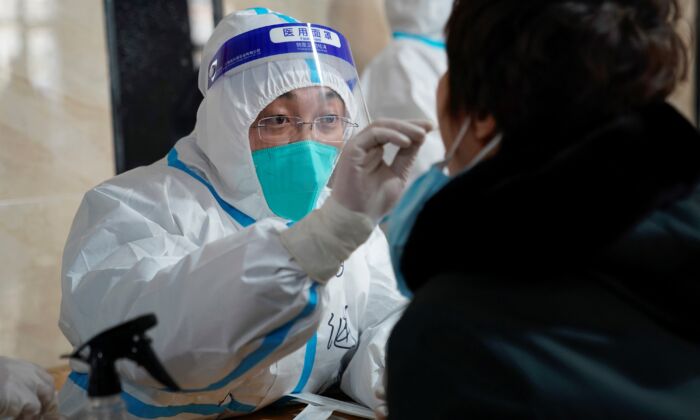 A medical worker takes a swab sample from a man to test for COVID-19 at an office building in Harbin, in northeastern China's Heilongjiang Province on Jan. 14, 2021. (STR/AFP via Getty Images)
INSIDE CHINA

Chinese authorities in northeastern Harbin city announced new COVID-19 infections on Sept. 21, and closed down public places such as schools, indoor entertainment facilities, and board and lodging accommodations.

The National Health Commission dispatched a medical team to Harbin, in Heilongjiang Province, to lead the local government in curbing the spread of COVID-19. This level of response indicates that the outbreak could be very serious and that central authorities are concerned that the local government can’t control the situation.

On Sept. 21, the local authorities said that three people tested positive for the CCP (Chinese Communist Party) virus, commonly known as novel coronavirus, and “patient zero,” the source of the recent outbreak, was healthy before being diagnosed with COVID-19. China News Net reported that patient zero is a young man surnamed Jiang.

On Wednesday, authorities announced eight new infections and the city was placed under semi-lockdown.

Patient zero Jiang was in close contact with a lot of people at a murder mystery game venue, which he visited three times, and other public places, according to Harbin municipal authorities.

Harbin authorities hosted a special press conference to announce the new COVID-19 outbreak on the eve of Sept. 21.

“Patient zero visited the Bayan No. 2 Hospital by himself [after exhibiting symptoms] and received a nucleic acid test. He then was diagnosed. … The two other diagnosed patients are close contacts of patient zero,” they announced.

Bayan is a county level town in Harbin.

Earlier that day, the Harbin Center for Disease Control and Prevention announced that Jiang had visited eastern Jiangxi Province on Sept. 7, and then stayed in Harbin for four days.

Since he returned home in Bayan on Sept. 11, Jiang went to restaurants and entertainment facilities every day. He then went back to Harbin for two days on Sept. 17 and 18, where he stayed in a hotel and visited a plastic surgery hospital.

Several Chinese media focused on the murder mystery game salon in Harbin, which Jiang visited three times, as the source of the recent spread of the virus.

A murder mystery game salon is a new type of entertainment facility in China, where participants stay in the same room and interact closely with one another during the game.

Authorities locked down the residential compounds where the COVID-19 patients live, and quarantined and tested all their close contacts, including other people who visited the same restaurants, entertainment facilities, hotels, salons, public baths, and hospital.

The Chinese regime installed a surveillance system to monitor every citizen’s activities, by using cell phone positioning and facial recognition cameras. The system records all visitors of each facility as well as their whereabouts.

The venues that the patients had visited in the past 14 days were disinfected thoroughly and forced to shut down. Local authorities did not indicate when these businesses can reopen.

The Harbin municipal government closed all daycare centers and schools, and students are required to resume classes online, starting on Sept. 22.

The local authorities announced today that it will order all residents in Harbin to take nucleic acid tests and lock down more neighborhoods if more people are identified as close contacts of those currently infected with COVID-19.

Currently, Fujian Province in southern China is suffering the worst outbreak in the country.

Vice Premier Sun Chunlan visited Xiamen city in Fujian on Sept. 20. She warned the local government that the outbreak in the province was in “stalemate status,” which means new cases will emerge every day and the outbreak will last for a while.

Residents from Xiamen, Putian, and Quanzhou cities in Fujian told the Chinese language edition of The Epoch Times on Sept. 20 that the outbreak is far worse than what local authorities have previously reported. They claim that authorities are concealing the actual number of cases and mishandling the outbreak, as testing sites are chaotic, medical supplies are lacking, and the cost of food has skyrocketed in locked down cities.