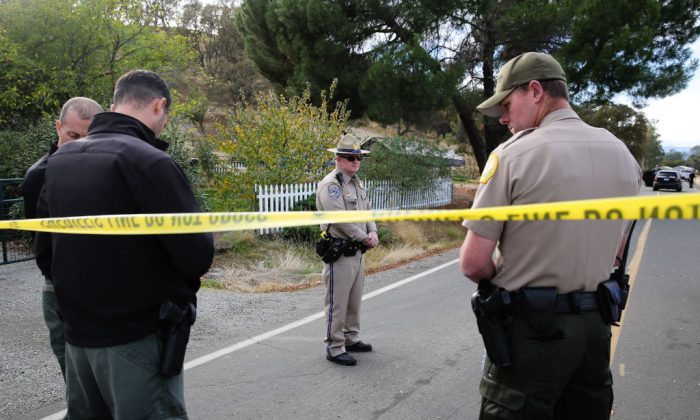 Law enforcement officers stand near one of many crime scenes after a shooting on November 14, 2017, in Rancho Tehama, California. (ELIJAH NOUVELAGE/AFP/Getty Images)
Crime and Incidents

Another victim was found killed by the California gunman who shot up an elementary school this week—his wife.

Authorities discovered the body of shooter Kevin Neal’s wife under the floorboards of their home, Tehama County Assistant Sheriff Phil Johnston told reporters at a news conference on Wednesday, Nov. 15.

Police believe his wife’s death could have prompted the rest of the shooting carnage in what seemed to be a random spree of terror, according to Fox News. She was found with several gunshot wounds.

“We believe that’s what started this whole event,” Johnston told reporters. He added that officials had already been searching for Neal’s wife, fearing that something may have happened to her.

“[We believe he] cut a hole in the floor and literally put her body in the hole,” Johnston said.

Johnston believes the wife was killed on Nov. 13—a day before Tuesday’s carnage.

News of the woman’s death was first announced at Wednesday’s conference. According to Fox News, the gunman targeted seven shooting locations, including an elementary school.

Neal’s shooting rampage killed a total of five people and injured 14 others—Neal himself was killed in a police shootout.

The gunman’s mother said that Neal had grown increasingly frustrated over an ongoing dispute with his neighbors. His mother told the Associated Press her son claimed his neighbors were running a methamphetamine lab that generated fumes harmful to his nine dogs.

According to the mother, Neal called her the day before the shooting, telling her, “Mom it’s all over now. I have done everything I could do and I am fighting against everyone who lives in this area.”

Police said that two if his first victims, were two of his neighbors, Fox News reported.

As of writing, Sheriff Johnston said they are still searching for the motive behind the shooting. He said at the conference that he believes Neal “was just on a rampage and I think he had the desire to kill as many people as he could.”

Back in January, authorities who responded to his home the day before the rampage—on a domestic violence call—confirmed that Neal was out on bail for allegedly stabbing one his neighbors.

“We have had history with him… he was not law enforcement friendly,” Johnston said at Wednesday’s news conference.

Resident Brian Flint, another neighbor of Neal, told the Record Searchlight newspaper that Neal had been shooting a lot lately.

“The crazy thing is that the neighbor has been shooting a lot of bullets lately, hundreds of rounds, large magazines,” Flint told the newspaper. “We made it aware that this guy is crazy and he’s been threatening us.” He also said that Neal stole his truck.

At the conference, Johnston said the gunman spent about six minutes shooting into Rancho Tehama Elementary School before he drove off to continue his spree. Johnston said one student was shot but is expected to survive.