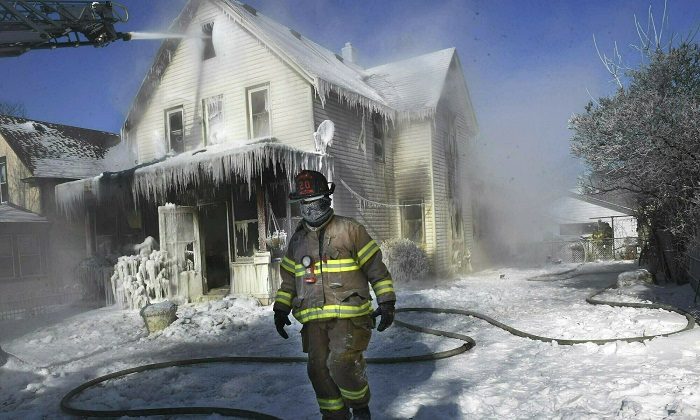 A firefighter walks past an ice-encrusted home after an early morning house fire in St. Paul, Minn., on Jan 30, 2019. (Jean Pieri/Pioneer Press via AP, File)
US News

DALLAS—Four people have been found dead in a house under construction in Dallas.

The Dallas Morning News reports that authorities say the two men and two children are believed to have died from carbon monoxide poisoning. Dallas Fire-Rescue spokesman Jason Evans says a generator powering a heater and cellphones was inside the house and had run long enough for the carbon monoxide to reach fatal levels.

Fire officials and police were called to the house in Dallas’ Oak Cliff neighborhood about 9:30 a.m. on Feb. 3.

The victims’ names and ages haven’t been released, but Evans says the children were young boys.

Property owner Hector Medrano says the men were construction workers who recently had to move from their apartments. He says he let them sleep in the home overnight.

A 12-year-old boy has died after a carbon monoxide leak at an apartment block in Alberta, Canada.

The apartment complex in Airdrie was evacuated for over six hours on Sunday, Feb. 4, after hazardous levels of carbon monoxide were detected, say police.

The warning came too late for the 12-year-old boy, who died at around 5 p.m., according to the Royal Canadian Mounted Police (RCMP).

At the family’s request, police are not releasing his name at the current time, said Airdrie RCMP Insp. Kimberley Pasloske during a press conference Sunday evening.

“Our community of Airdrie is very close and this news hits us very hard,” said Pasloske.

She refused to comment on the condition of the other two family members, who were also taken to the hospital.

Police initially announced the evacuation of the four-storey apartment block at 700 Willowbrook Rd., at 9 a.m. on Sunday.

By around 3:40 p.m. they declared all but six of the 136 evacuated units safe again, but warned residents to leave windows open to allow any residual gas to escape.

“We had extremely high readings of 2,100 parts per million on the second floor, which is really quite elevated,” Airdrie Fire Department Deputy Chief Garth Rabel told CBC.

Carbon monoxide is not only dangerous because it is so poisonous, but also because it is hard to detect until it is too late, since it is colorless and odorless.

It also accumulates inside the body, EMS spokesman Stuart Brideaux explained to the Calgary Herald.

“The issue with carbon monoxide … it has a great affinity in the body, so low concentrations over a long period can eventually have the same cumulative effect as a high concentration in a small period,” he said. “The problem is when you inhale it, very little to any of it is actually exhaled back out.”

“Early symptoms are sometimes described as flu-like, except you wouldn’t have a fever but you may have headaches and nausea, vomiting and general malaise, feeling dizzy, unwell,” said Brideaux.