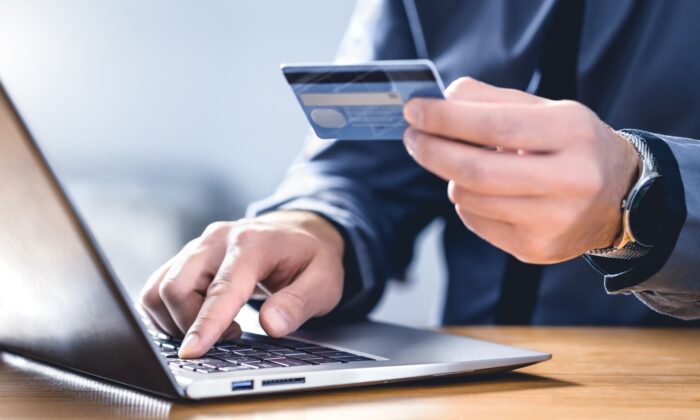 A man uses his credit card and laptop to log in to internet bank.(terovesalainen/Adobe Stock)
Australia

A new banking system will help thousands of Australians save an estimated $120 million (US$89.3 million) annually by stopping scam transactions from fraudulent overseas sellers.

Westpac, one of the “big four” banks in Australia, has announced on April 11 that it has begun automatically blocking suspicious online transactions from international retailers with high risks of scams.

When a scam is detected, the bank will block the transaction and inform the customer of the intervention through text messages. However, customers can contact the bank to proceed with the transaction if they believe it is legitimate.

Westpac said that when the bank trialled the real-time system in 2021, 99 percent of the customers did not go ahead with the purchase when receiving the scam alert.

In the initial trial, which focused on online diet pill sellers with dubious marketing claims, the bank blocked 11,000 potential scams and helped 4,000 customers save more than $1.2 million.

This new layer of protection is now available to Westpac customers who use debit or credit cards or mobile wallets from third parties.

Chris de Bruin, the chief executive of consumer & business banking at Westpac, said there was an upward trend in online shopping scams, and an increasing number of international sellers were targeting Australians with deceptive advertising.

“Over the past two months, we have stopped 69,000 customers losing more than $6 million through our scam blocks, with customers saving an average of $87,” he said in a statement.

“Through expanding this to more merchants, our modelling predicts we will stop an additional 2,000 customers each day, losing an estimated $120 million annually to dodgy overseas retailers.”

The bank’s scam detection technology uses the transaction patterns, behaviours, and attributes of online merchants and previous reports from other customers to create lists of high-risk sellers and prevent their transactions from going through.

“We want to help put a stop to online scams by blocking retailers who may be misrepresenting what they’re selling or duping Aussies into handing over money for products they’ll never receive,” Westpac’s head of fraud Ben Young said.

He also reminded customers to take caution when shopping online.

“While scams are getting more sophisticated, so are the banks at detecting them, and we want scammers to know we are watching and taking action to protect our customers,” Young said.

According to the Australian Banking Association, there were around 39,000 scams reported in the first three months of 2022. And eleven percent of the reported scams resulted in financial losses with a total amount of $72 million.