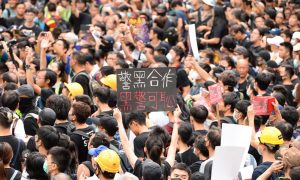 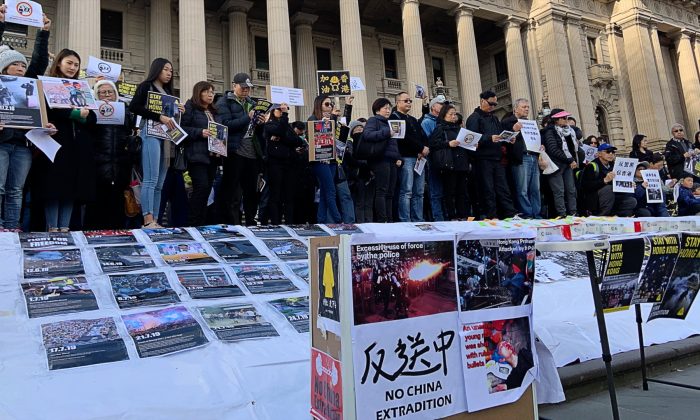 Hong Kong Rally on the steps of Victoria Parliament in Melbourne, Australia on 28 July, 2019. (The Epoch Times)
Australia

Australians Stand With Hong Kongers in Fight for Freedom

MELBOURNE, Australia—Australians gathered at the steps of Victorian Parliament on July 28 to support ongoing protests in Hong Kong against Beijing’s growing encroachment.

Simultaneous rallies were held across 6 Australian cities, with an estimated total turnout of 2000 people, according to the Australia-Hong Kong Link.

The rallies were a show of solidarity with millions of Hong Kongers who over the past few months have taken to streets to protest a controversial extradition bill that would allow people to be transferred to mainland to be processed in courts controlled by the Chinese Communist Party.

In Melbourne, around 400 people, mainly from the local Hong Kong community, attended the rally, which included speakers such as university students who participated in the Hong Kong protests and a famous Chinese artist.

Their message was clear—Australians need to stand with Hong Kong and protect core values such as freedom.

“It has already been months since June,” event organiser Jane Poon said at the event. “We have not been given any response by the [Hong Kong] government to [meet] our five demands.”

The five demands Poon referred to are: the complete withdrawal of the extradition bill; a retraction for calling June 12 a “riot”; an independent investigation into police use of force on June 12; the exoneration of individuals previously arrested; and universal suffrage for members of the Legislative Council including the position of chief executive, currently held by the city’s top official Carrie Lam.

In recent days, calls for the government to completely withdraw the bill has morphed into greater frustration at police tactics and the government’s response to protests.

Poon, referring to the July 27 clashes between protesters and police in Yuen Long,  said police in Hong Kong are no longer serving the people.

The July 27 protests saw thousands of protesters take to the streets to protest the delayed police response to a mob attack by suspected triad members at the local metro station a week earlier.

“The Hong Kong Police Force, and the government [have proven they do not] serve, protect or stand on the side of fellow … Hong Kongers, who demand only their fundamental and inalienable freedom of speech and their human rights.”

Poon said that the continuing violence in Hong Kong is now presents a travel risk for Australians.

“What happened in Hong Kong in the past … months, can clearly show that Hong Kong is no longer safe for Australian citizens or anyone travelling to Hong Kong to visit. So we urge the Australian government would raise the Travel Warning in Hong Kong, to protect their citizens safety in Hong Kong.”

“I hate what the Hong Kong police are doing to us since we are just students. We never try to attack them. Every single time they just [used] the tear gas or chemical weapons to ask us to leave,” Ma told The Epoch Times.

Ma was in Hong Kong for one month and was a volunteer first aid officer at the front lines during the Hong Kong clashes.

He said he felt compelled to volunteer to protect the young protesters.

“[Young people are standing up] because they are just trying to get what they want. To get the freedom, to get their rights, the freedom of speech.”

Ma said the Hong Kong government was not listening to the people.

“It is really sad to see that the Hong Kong government is doing nothing, and even in Yuen Long there are some gangster trying to attack people.”

Poon said the hijacking of a demonstration in support of the Hong Kong protests by pro-Beijing students at the University of Queensland on July 24 highlights a growing assault of free speech in Australia.

“In Queensland university, freedom of speech in Australia has been attacked. And we put zero tolerance on such an issue,” she said.

“Anyone in Australia should believe that Australia is a place where we have freedom of speech, and we should protect these values.”

The actions of the pro-Beijing students were praised by China’s consul-general in Brisbane, Xu Jie, who said that “anti-China separatist” protesters had “ulterior motives,” the Australian reported on July 27.

In response, Foreign Minister Marise Payne said in a statement that the right to free speech was protected in Australia “even on contentious and sensitive issues.”

“The government would be particularly concerned if any foreign diplomatic mission were to act in ways that could undermine such rights, including by encouraging disruptive or potentially violent behavior,” she said.

Support From the Community

Henry Sze, an Australian citizen originally from Hong Kong praised the efforts of his fellow Hong Kongers in standing up to the government.

“They just want to have freedom of speech, have universal suffrage which is fairly reasonable—which the British government promised Hong Kong people,” Sze said at the rally. “I see that overseas people are concerned about that, and they are giving support to Hong Kong people.”

Tenzin Khangsar, president of the Tibetan Community of Victoria, said communist China has extended the persecution of Tibetans and other minorities into Hong Kong.

“We have been suffering for the last 60 years, and we don’t want that to happen to the people of Hong Kong,” Khangsar said.

“We have to unify together to collapse this communist regime, otherwise if we allow this, if we are not united, then it will continue to happen.”

Alim Osman, president of the Uyghur Association of Victoria, said the Chinese regime’s dictatorship was evident in its current policy in the northwestern region of Xinjiang, where more than 1 million Uyghurs and other Muslim minorities are estimated to be detained in internment facilities in a sprawling crackdown on “extremism.”

“Once they get you into the dictatorship system, then there’s no freedom. So Uyghur people now stand with Hong Kong people. We should stand together against China’s Communist Party.”

Ross Lineham, an Australian citizen inspired by the young protesters in Hong Kong, hopes that the protesters’ demands will soon be met.

“I really hope to God that the young people get their needs met and that the world pays attention to the way the Chinese government treat, their human rights record is disgusting. It’s absurd. And the people in Australia need to understand that they need to see the truth,” Lineham said.

Also speaking at the rally was Chinese political artist, Badiucao, who was inspired by the action of the Hong Kongers.

“Even Hong Kongers or mainlanders like me, who want to show some different opinion to China, have to face certain intimidation and danger, even if we are not in the territory of China,” he said.

He called on the Australian government to protect people who speak out about issues against the communist regime.

“The reason why I developed this new style of Lennon Wall is because I think now we can keep it with us and take it to our protest every week, every day. As long as Hong Kong is not free, as long as China is not free, we’ll keep the fight.”